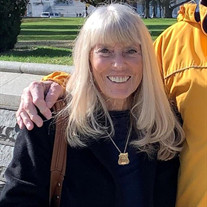 With great sadness, we announce the sudden loss of our beloved wife and mother, Joyce Tarlosky Scott (68), of Fairfax Station, VA, on February 13, 2021. She is preceded in death by her nephew Matthew and great nephew Ethan. She is survived by her husband of 44 years, Derrill William Scott (Bill): parents, Rudolph and Juanita Tarlosky; daughter, Lyndsey Holmes (Austin); grandchildren, Sawyer Jayne and Hayden; siblings, Pam Scarce (Al) and Rudolph Tarlosky Jr. (Denise); nieces, Sheryll, Alison (Joey); nephews, Nathan (Brittany), Kevin, and Chris; and several great nieces and nephews. Joyce was born in Washington, D.C., to Rudolph and Juanita Tarlosky on August 31, 1952. She spent her childhood in Virginia Hills, where she attended Virginia Hills Elementary School, Mark Twain Middle School, and Thomas A. Edison High School. She spent her summers working as a lifeguard and swim instructor for the Virginia Hills Pool while also competing with the swim team. After high school, she attended Madison College for her undergraduate degree in Speech & Language Pathology. She then continued her education with James Madison University and received her Master’s degree. She started dating her husband Bill in September 1976. As Bill stated, “She couldn’t wait any longer, so we decided to get married a short 7 months later on April 9th, 1977.” On November 11th, 1991, her world changed forever for the better when she and Bill were blessed to adopt their daughter, Lyndsey. Joyce began attending Christ Church when founded in 1993 where she remained an active member and believer of Jesus Christ. She lived with Kingdom purpose and intentions in all that she did. Joyce spent most of her evenings, when she didn’t have a social event, on the couch, watching Jeopardy and her weekly television shows. She could always count on her dog, Sophie, to be snuggled up next to her. Everyone who knew Joyce knew that she never missed a chance to enjoy a glass of Mountain Dew, a piece of chocolate, and a good book. After graduating from college, Joyce began her 33 enjoyable years with the Prince William County School System as a Speech & Language Pathologist; where she retired from on June 12th, 2007. In February 2008, she started working during tax season for her brother (Rudy), where she enjoyed preparing taxes with The Beatles playing on Pandora in the background. Not only did she work long hours, but she never missed a chance to bake cookies for their clients every Saturday that became legendary. Over the years, Joyce took hundreds of trips to Myrtle Beach, SC, with Debbie and her family. However, her favorite week of the year was always the third week of July. During this week, family and friends from all over (Virginia, Ohio, Maryland, Kentucky, Pennsylvania, Florida) came to the beach for the Annual Cousins Beach Week. Beach Week was a family tradition that first began with the Bailey and Tarlosky family during the summer of 1967 in Ocean City, MD. In 1969 they moved to Virginia Beach, VA, where they were joined by the Vercamen and Poe families. In 1991, the permanent move of Beach Week to Myrtle Beach, SC, took place. Each year after that, the amount of family and friends who attended Beach Week continued to grow. Everyone who knew Joyce knew that her family was, without a doubt, the most important thing in her life. She didn’t let a single birthday or anniversary go by without sending gifts, cards, and reaching out personally. When it came to celebrations and holidays, Joyce’s motto must have been, “the bigger, the better”, and she never missed an opportunity to open up her home to anyone and everyone she loved. Every event she hosted was planned with thorough detail, and she enjoyed many late nights preparing her famous strawberry, peach & blackberry jams, as well as apple butter as party favors for those who would attend. Her jams quickly became a staple in the refrigerators of family and friends. Joyce impacted lives in many different social circles throughout her time on earth. She attended numerous Washington Capitals, Nationals, and Redskins games. She enjoyed the Washington Redskins’ games so much that she and Bill were season ticket holders for over 30 years. Joyce was the Vice President for the Thomas A. Edison High School Class of 1970, which led her to actively serving on the reunion planning committee, beginning with the first class reunion in 1980. For over 40-consecutive years, Joyce and the rest of the “Bridge Ladies” would get together every two weeks for hours of bridge, laughs, and fun. Joyce also looked forward to dinner with her group of Edison girls (Chris Huff, Jennifer Wolf, Lynn Gomez, and June Yamayoshi) once-a-month for 18 years. Throughout those years the group was known to close down different restaurants from staying so late sharing stories. Not only did Joyce have a lot of friends from different walks of life, but she continued to add to her social circle by turning acquaintances into lifelong friends. There is no doubt all will greatly miss her. A visitation will be held Saturday, February 20, 2021, from 11:00 am-12:00 pm, followed by a private service for the family. In place of flowers, donations can be made in Joyce’s memory to Lorton Community Action Center (LCAC), where she served many volunteer hours at LortonAction.org (9518 Richmond Highway, Lorton, Virginia, 22199).

With great sadness, we announce the sudden loss of our beloved wife and mother, Joyce Tarlosky Scott (68), of Fairfax Station, VA, on February 13, 2021. She is preceded in death by her nephew Matthew and great nephew Ethan. She is survived... View Obituary & Service Information

The family of Joyce Tarlosky Scott created this Life Tributes page to make it easy to share your memories.

With great sadness, we announce the sudden loss of our beloved...

Send flowers to the Scott family.