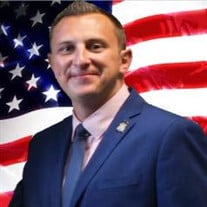 Joshua Bryant Baldwin, age 37 of Alexandria, Virginia suddenly left this life on October 10, 2019. Joshua is survived by his wife, Kelly Baldwin, his children, Liam and Emma, his parents, his brothers and sister, his grandparents, and countless friends. Josh was born in Fairfax, Virginia on April 16, 1982 to Dawn Bonner and Claude (Buddy) Baldwin. He graduated from Radford University in 2007 with a Bachelor's of Business Administration degree and had a long and successful career as an analyst in the Intelligence Community. On May 14, 2011 he married Kelly, his college sweetheart. On August 19 and February 24 respectively, he welcomed his two beautiful children, who were the most important part of his life. Josh was a devoted husband, father, brother, son, grandson, and friend. He was extremely passionate about his career, helping to protect and defend his country - earning him a prestigious national award from the Office of the Director of National Intelligence. He was a gifted data scientist that was able to see extremely complex connections or patterns that others could not see. Josh had many talents. He was able to fix anything with a motor and virtually any electronic device. Josh loved "suping up" his children's toys, creating the most tricked out John Deere power wheels in the country. He loved playing with his children, watching stand up comedies, riding his motorcycle, working on projects at his home, and helping others. He will be loved always and missed dearly by his family, friends, and all that knew him. One of Josh’s favorite sayings was, "We must accept finite disappointment, but never lose infinite hope." A viewing is scheduled for Friday, October 18 from 5:00-7:00 p.m. at Jefferson Funeral Chapel, and a funeral service is scheduled for Saturday, October 19 at 10:30 a.m. at Groveton Baptist Church, in Alexandria, Virginia.

Joshua Bryant Baldwin, age 37 of Alexandria, Virginia suddenly left this life on October 10, 2019. Joshua is survived by his wife, Kelly Baldwin, his children, Liam and Emma, his parents, his brothers and sister, his grandparents, and countless... View Obituary & Service Information

The family of Joshua B. Baldwin created this Life Tributes page to make it easy to share your memories.

Send flowers to the Baldwin family.