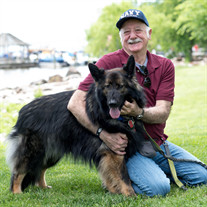 Joseph Vincent (Vince) Vozzola November 23, 1950 – November 14, 2019 Vince passed away peacefully on November 14, surrounded by his loving wife, his sister, and dear friend. Vince was a native of Alexandria, graduated from Thomas Edison High School (1969). He proudly served his country in the United States Navy Reserve for twenty-two years, retiring in 1992. Vince retired from the automotive industry, working in various capacities in 2013. Vince is preceded in death by his parents, Joseph and Lena Vozzola and a sister, Sharon Adams. Vince leaves behind his devoted wife of 37 years, Michele Crandlemire Vozzola, two sisters, Marcia Jo Payne and Mary Sue Byrd. He is also survived by his aunt, JoAnn Moore, his brother-in-law, Bruce Crandlemire, nephews, nieces, grandnephew, grandnieces, and cousins. He will be dearly missed by his family, beloved dog, Georgia, and many friends. Friends and family have described Vince as a kind and caring man. He was a man of character, courage, humility, and integrity. He enjoyed building model train layouts, playing golf, and working around his home. A Memorial Mass will be said for Vince, Saturday, November 30, 2019, 12:00 p.m. at St. Louis Catholic Church at 2907 Popkins Lane, Alexandria, VA. Inurnment will be on Wednesday, September 16, 2020, at Arlington National Cemetery. In lieu of flowers, donations may be given to Pets for Patriots, 218 E. Park Ave., #543, Long Beach, NY 11561 (petsforpatriots.org).

The family of Joseph Vincent Vozzola created this Life Tributes page to make it easy to share your memories.

Send flowers to the Vozzola family.