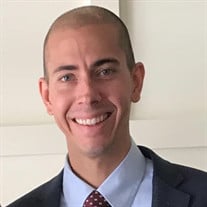 Joseph Paul Rogers (38), beloved son, brother, husband, father and friend, passed away on Monday, February 7, 2022, at his home in Alexandria, VA, surrounded by his loving family. He is survived by his adored wife of eight years, Katie, and their precious daughter, Louise; his proud parents, Michael and Nelda Rogers, loving sister, Kathryn (engaged to Samuel Hudson); grandparents, Mary Pat Rogers and Louie Spears; and countless extended family and friends whose lives he impacted. Born in Fort Myers and raised in Pensacola, Florida, Paul enjoyed a quintessential childhood spent playing soccer with friends and fishing with his PawPaw, among other things. He is a proud alumnus of the University of Florida, where he cheered the Gators to three national championships during his time in college. He would be no less than an inspiration to another notable Florida alum, Tim Tebow, whom he so admired that he made the long trek to Hagerstown, Maryland, to see him play baseball. After graduation from Florida, Paul took on the challenge of law school, finding his way to American University in Washington, D.C. It was here that he met his future wife, Katie, at a Florida Gators watch party on Capitol Hill. It was also in Washington that he began his career with the Federal Bureau of Investigation, a lifelong dream which he doggedly pursued. He was first an intern, then a Staff Operations Specialist. This was enough for most of his non-Bureau friends to think he was Jack Bauer, but Paul had his sights set on Agent. Following several health-related setbacks that would have defeated many others, he ultimately secured a spot at Quantico, where he stood out for his unique legal knowledge. He became a Special Agent for the FBI. Then, in early 2019, at the gender reveal ceremony for the baby we now know as Louise, Paul cried tears of joy upon learning he would be a father to a daughter. When Louise was born, he was transformed. Paul was an utterly loving father who poured himself into the role, inherently fostering in her very similar traits that will forever be testament to Paul’s legacy. He took not a moment for granted as he watched his pride and joy grow. In his home and at work, there was no one more dutiful and devoted than Paul. His moral compass and extraordinary character guided a life in which he made a loving home with a wonderful woman, brought a beautiful baby girl into the world, and achieved his professional dream. His life of service ended far too soon, but his legacy lives on with everyone who knew and loved him. Relatives and friends may pay their respects at Paul’s viewing on Thursday, February 10, 2022, at Jefferson Funeral Chapel, 5755 Castlewellan Drive, in Alexandria, VA 22315, from 4-6 p.m. A Mass of Christian Burial will be held at St. Lawrence Roman Catholic Church, 6222 Franconia Road, in Alexandria, VA 22310 on Friday, February 11, 2022, at 10:30 a.m. Paul will be buried directly following the funeral. His final resting place will be the lovely Ivy Hill Cemetery in Alexandria, VA. In lieu of flowers, contributions can be made in Paul’s memory to Race for Hope DC. We have organized a group for the upcoming Race for Hope DC under the group name "Team PR." This annual race is hosted by the National Brain Tumor Society and supports brain tumor research. We are asking for donations through the FBIAA Member Assistance Fund to support Katie and Louise. Please visit https://fbiaa.org/ways-to-donate (choose Member Assistance Fund and add Paul’s Bureau name in the comments: Joseph Paul Rogers).

Joseph Paul Rogers (38), beloved son, brother, husband, father and friend, passed away on Monday, February 7, 2022, at his home in Alexandria, VA, surrounded by his loving family. He is survived by his adored wife of eight years, Katie, and... View Obituary & Service Information

The family of Joseph Paul Rogers created this Life Tributes page to make it easy to share your memories.

Send flowers to the Rogers family.