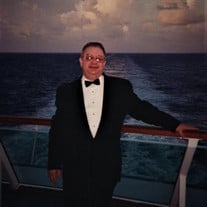 Joseph “Joe” Robert Hribar of Alexandria, Virginia passed away on Tuesday, July 13, 2021. He is preceded in death by his parents, Joseph John and Anna Marie Hribar and his brother, Robert Hribar. He is survived by his loving wife of 52 years, Marilyn Hribar, children; Joseph Robert Hribar Jr., Aimee Marie Menke (Art), Tricia Ann Hribar, Mary Beth Breeden (Oliver), sister, Roberta Ann Storz, grandchildren; Samantha, Julie, Nicole, Lauren, and Alexis, and great-grandchildren, Landon and AJ. Nephews; Patrick, James, and Jerry, Nieces; Shannon, Jennifer, and Stacy. Joe attended West Side Central Catholic High School in Luzerne, PA. Throughout high school, he played football as a fullback. During his senior year, the team was undefeated and Joe was chosen for the All-Star Team for Wyoming Valley. This was an honor that had not been bestowed upon any other players from the private high school. Although Joe received a congressional appointment to the U.S. Naval Academy with a full football scholarship, he chose to stay in his home state and continued his education at King’s College in Wilkes-Barre, PA. Here he earned his Bachelor of Science in Accounting. After serving 3 years in the US Army, he was moved to civilian ranks to finish his tour. Joe retired from the Federal Government in 2005 after 42 years of service. He was a devoted husband and father and enjoyed spending time with his family, cruising and watching sports. The Mass of Christian Burial will be held at St. Louis Catholic Church (2907 Popkins Ln) on Wednesday, July 21, 2021 at 11:00 AM with Interment following at Mt. Comfort Cemetery (6600 S Kings Hwy). In lieu of flowers, donations may be made to The Poor Clare Monastery (2505 Stonehenge Drive, Alexandria, VA 22306)

Joseph &#8220;Joe&#8221; Robert Hribar of Alexandria, Virginia passed away on Tuesday, July 13, 2021. He is preceded in death by his parents, Joseph John and Anna Marie Hribar and his brother, Robert Hribar. He is survived by his loving wife... View Obituary & Service Information

The family of Joseph R. Hribar created this Life Tributes page to make it easy to share your memories.

Send flowers to the Hribar family.