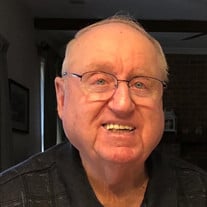 Joseph G. Dezzutti, Jr passed away at home in Springfield, VA, surrounded by many loved ones. He was predeceased by son Jack and son-in-law Carl Carey. He was survived by wife Joanne neé Kober; children Rick (Joy), Rob, Janice Carey (Carl), Jill (Nadim), Jamie (Lorrie), and Lisa (Aaron); grandchildren Ben and Dan Dezzutti, Kylie Powell (John) and Josh Carey, and Jacob Dezzutti; great-grandchildren Quinn and namesake Maxwell Joseph Powell; and many nieces, nephews and friends. Joe loved his siblings Lucille Dezzutti, Paul Dezzutti, and Phyllis Orinick, and remained close with his surviving half-sister Margaret Jean O’Palka and predeceased half-brothers Peter and Paul Lobby. Joe was born December 30, 1934 in Morgantown, West Virginia, and when Uncle Sam came calling, Joe enlisted in the U.S. Army, his parents Giuseppe Dezzutti and Carrie Lobby had to sign for his recruitment at 17 years of age. Immediately following basic training, Joe entered the Korean theater. In the Army, he sped through the ranks quickly to become one of the fastest enlisted troops to the rank of first sergeant. But the first time he was struck by lightning, “Bugs,” as his mother called him, was far from home. Sitting in a pup tent in Korea with a foot high on a peg, he surely didn’t know what happened to him. The experience seemed to give Joe the electric personality for which he was known. He awoke after his brief meeting with a gigajoule of energy only for nurses to tell him that he was paralyzed from the waist down, but he recovered quickly. He found himself stationed in Pittsburgh, Pennsylvania, where he found the first and best true love of his life, Joanne Kober. Meeting in August 1955, the two were engaged in November, and married in May 1956. Just to prove the nurses in Korea wrong for thinking his brush with electricity would make him sterile, and instead taking the Chinese view of lightning as a symbol of fertility, he and Joanne went on to raise six children. Happy to see the world on the government’s dime, Joe gladly accepted two tours in Germany and one in Vietnam, receiving the Army Good Conduct Medal five times as well as the Bronze Star amongst many more awards. The family settled in Lorton, VA, where lightning, remaining a sign of good luck, somehow found him again, two more times, on the golf course and at home. With newfound energy, Joe chaired the Eucharistic ministers and served on the parish council within the Army Fort Belvoir Catholic Community, and regularly served his church community in many ways. In 1982, he became a cursillista and served on many teams. Joe often reached out with his heart and hands, organizing parish picnics, and offering communion to the sick. There with friends, Joe also became a charter member of the Knights of Columbus, and rose to become a grand knight. Following his Army retirement in February 1973, Joe embarked on a second career - giving his boys an unnatural appreciation for buying and selling automobiles. Only upon a second retirement did Joe, known as “Pops” around the links, have time to golf as much as he wished, becoming a member and starter at Chantilly Golf and Country Club, where his well-honed accuracy led to four confirmed holes in one. Always one to expand his circle, he also had time to continue his friendships with the priests at Fort Belvoir and become a Eucharistic minister at the Church of the Nativity in Burke, VA. His overflowing heart was topped off with grandchildren and in his last years, Joe opened his heart and rosary pouch to his great-grandchildren, giving the kids someone to love immensely and something to play with. Only the Washington Football Team winning a championship could have made him happier, though expectations remained low. In lieu of flowers, the family asks for donations to the Paralyzed Veterans of America at PVA.org, and to the Heartland Hospice Memorial Fund at HeartlandHospiceFund.org. The family gives many thanks to Heartland Hospice of Fairfax, VA for providing comfort, joy, and cookies when in need.

The family of Joseph G. Dezzutti created this Life Tributes page to make it easy to share your memories.

Send flowers to the Dezzutti family.