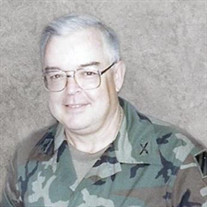 COL John J. O'Keefe, 80 of Fort Belvoir, VA passed away on Saturday, July 18, 2020. He was born on September 22, 1939, in Dickinson, North Dakota to Albert and Hazel O’Keefe. He was a loving husband, father, grandfather, (Gumpy), and great-grandfather. Col O’Keefe proudly served in the US Army Field Artillery (Redleg) over 30 years which included two Combat Tours in Vietnam, and later as the Commander of the Third Infantry Division Artillery. He served in the Knights of Columbus, was active in support of the retired military community and with many Veterans associations, and actively participated in the initial planning for the National Museum of the United States Army. COL O’Keefe is survived by his daughter Elizabeth M. Egbert, two sons, John J. O'Keefe II and Patrick J. O'Keefe, two sisters, Janet Auble and Marcia O’Keefe, 7 grandchildren and 4 great grandchildren. In addition to his parents, he was preceded in death by his wife, Mary Lynn O’Keefe on February 22, 2020, and three brothers. A Funeral Mass and interment with Full Military Honors will be conducted at Arlington National Cemetery at a date to be determined. Information regarding the date for the Funeral Mass and Interment at Arlington National Cemetery will be published on the Jefferson Funeral Chapel web site once confirmed. In lieu of flowers, the family asks that you make memorial contributions to the Concussion Legacy Foundation, 361 Newbury Street 5th Floor, Boston, MA 02115 (www.concussionfoundation.org/CTE-resources).

The family of Col. John J. O'Keefe created this Life Tributes page to make it easy to share your memories.

Send flowers to the O'Keefe family.