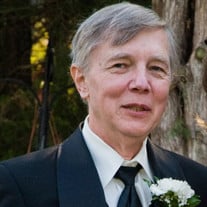 On July 27, 2020, John Francis Hanrahan, loving husband and father of three children, passed away at home after a long battle with cancer. John was born on September 9, 1943 in Washington D. C. at Providence Hospital to Francis and Genevieve (Walter) Hanrahan. He graduated from Archbishop Carroll High School in NW D.C in 1961 and from the Fordham University College of Pharmacy in 1966. On May 30, 1972 he married Corlin (Lyn) Dombey. They raised three children, Elizabeth, Anthony, and Katherine. He began his pharmacy career at Peoples Drug Stores and worked at Arlington Hospital for 31 years until his retirement. A lifelong learner, John continued his education in pharmacy and maintained his pharmacy license well into his retirement. John enjoyed gardening and hiking, particularly in the Shenandoah Mountains. He was an adventurer, insisting on taking the “scenic route” on car trips to explore the dirt roads and small towns on the way to his destination. John loved spending time with his grandchildren, playing games, completing puzzles, and teaching them about life. Although he was a private person, John showed his wit and sense of humor to those closest to him. John was preceded in death by his father, Francis and his mother, Genevieve. He is survived by his wife, Corlin (Lyn), his three children, Elizabeth Hanrahan (Roderick Tan), Anthony Hanrahan (Katie Looney), and Katherine King (Sean-Paul King), four grandchildren, Genevieve Tan, Flynn and Rowyn Hanrahan, and Declan King, his brother James (Theo) Hanrahan, nieces and a nephew, and 8 green bean plants. Interment will be held privately. A memorial Mass may be held at a later date. Please consider making donations in lieu of flowers to a charity of your choice in John’s memory.

On July 27, 2020, John Francis Hanrahan, loving husband and father of three children, passed away at home after a long battle with cancer. John was born on September 9, 1943 in Washington D. C. at Providence Hospital to Francis and Genevieve... View Obituary & Service Information

The family of John F. Hanrahan created this Life Tributes page to make it easy to share your memories.

Send flowers to the Hanrahan family.