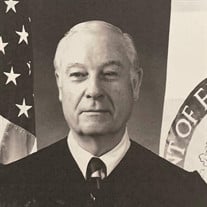 John Francis Cook, longtime resident of Annapolis, Maryland, passed away on Friday, July 30, 2021. He is preceded in death by his parents, Robert and Nellie Cook and brother. He is survived by many longtime friends and will be missed by many. John was born in Green Bay, Wisconsin on July 21, 1924. He attended Marquette University where he obtained his PhB and JD degrees. During his time at Marquette University, he started serving in the Navy as a Training Corps cadet for the Naval Reserves. He was placed in active duty in July 1943 and was commissioned ENS in February 1945. After graduation, he began his career in the Navy by serving as a communications officer on the USS Bordelon (DD-881). After returning from active duty, September 1946, he continued to service in the Naval Reserve Units which allowed his to travel all over the United States including bases in Milwaukee and Oshkosh, Wisconsin, Alexandria, Virginia, Washington, DC, and Sacramento, California until his retirement in 1983 with the rank of Captain. During his term in the Navy Reserves John was the commanding officer of NAVSECGRUDIV 9-13 (1956-59), NAVSECGRUDIV 9-8 (1968-69) and NAVSECGRUDIV 5-15 (1973-74). Due to his long tenure in the Navy and Naval Reserves he earned many accommodations including, American Theatre, WWII Victory Medal and the Occupation (Japan), China Service, Naval Reserve and Armed Forces Reserve Medals. While in the United States Naval Reserves John maintained the position of assistant city attorney in Milwaukee for 21 years. He them followed his military service by working for the United States Department of Justice where he service as a Federal administrative Law Judge for 21 years, retiring as Chief Judge of the United States Department of Education in 1994. A service to honor John’s military service will be held at Arlington National Cemetery at a later date. Please view and sign the family guestbook.

John Francis Cook, longtime resident of Annapolis, Maryland, passed away on Friday, July 30, 2021. He is preceded in death by his parents, Robert and Nellie Cook and brother. He is survived by many longtime friends and will be missed by many.... View Obituary & Service Information

The family of John Francis Cook created this Life Tributes page to make it easy to share your memories.

Send flowers to the Cook family.