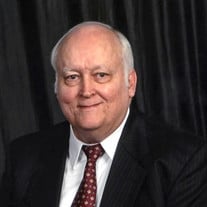 Dedicated patriarch James Gordon Winkler passed into eternal life on Friday, January 7, 2022, in Alexandria, Virginia. During his 87 years, he left a legacy of faithfulness and love to his many family members. It’s impossible to encapsulate nearly nine decades of a life so well lived. But James Winkler’s defining characteristic can be summarized in the phrase “servant leadership”. There are countless relevant Bible verses – among them is 1 Peter 5:2 which reads: “Shepherd the flock of God that is among you, exercising oversight, not under compulsion, but willingly as God would have you; not for shameful gain, but eagerly.” Verse 4 of the same chapter continues: “And when the Chief Shepherd appears, you will receive the unfading crown of glory.” “Jim”, as he was known by his family and friends, was born May 25, 1934, the son of late Coast Guard Commander Anthony P. and Mary H. Winkler (nee Hall) of Alexandria, Virginia. He is survived by his beloved wife Sue and six children: James Anthony, Daniel Gerard (spouse Magui), Pamela Susan (spouse Mitch Dudley), Dianne Marie (spouse Joe Ryder), Christopher John (spouse Kristi) and Brian David (spouse Kim). Jim is also survived by two brothers, David and Charles (spouse Stephanie) and sisters-in-law Marcia Sue and Karen Winkler. Jim’s sister and five brothers preceded him in death (Therese, Paul, Tony, Frank, Richard and Robert). A man of unwavering love and faith, Jim also had a wonderful sense of humor and a childlike enthusiasm for fun and adventure. He was sensitive, honorable and loyal. But first and foremost, he served. He served God, his country (military and civilian service) and his family. Jim always put others before himself and led with Godly wisdom, humility and compassion. That’s his legacy. Jim and Sue have lived in Alexandria since 1960 and their extensive family also includes 20 grandchildren, 20 great-grandchildren (another is due in March) and numerous nieces, nephews and cousins. As devoted parents and grandparents, faith and family have always been foundational for both. Jim earned his degree in Electrical Engineering from The Catholic University of America in Washington, D.C. and served as a U.S. Air Force pilot for three and a half years before receiving an honorable discharge upon the untimely death of his father. Jim was employed by the Naval Research Laboratory for 40 years as a design engineer and manager for several major Navy satellite projects. He was a respected leader, mentor and friend who inspired all he interacted with in daily life. As members of St. Louis Catholic Church in Alexandria for over 60 years, Jim and Sue have faithfully served their community. After retiring, Jim and Sue remained active in service through Eucharistic ministry and other volunteer efforts. Jim was also a member of the Knights of Columbus for several years. Jim now wears that well-deserved “unfading crown of glory” with grace and gratitude. He was an indisputable hero to so many and will be deeply missed. Jim has earned his heavenly reward and resides with so many loved ones who have gone before. Mass of Christian burial will be held at St. Louis Church on Thursday, January 20, 2022, at 11 a.m. followed by interment at Mount Comfort Cemetery in Alexandria. Flowers may be sent to Jefferson Funeral Chapel or St. Louis Catholic Church. In lieu of flowers, feel free to give to the following: Wounded Warrior Project https://support.woundedwarriorproject.org Donate (you may check the box to donate in Jim's name)

Dedicated patriarch James Gordon Winkler passed into eternal life on Friday, January 7, 2022, in Alexandria, Virginia. During his 87 years, he left a legacy of faithfulness and love to his many family members. It&#8217;s impossible to encapsulate... View Obituary & Service Information

The family of James Gordon Winkler created this Life Tributes page to make it easy to share your memories.

Send flowers to the Winkler family.