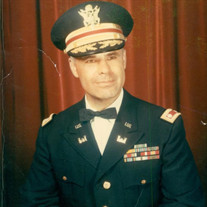 LTC James E Stapula Born in Milwaukee, Wisconsin on January 11th, 1922, Jim passed away on December 4, 2021, at 99 years old. He is survived by Noemi, his very loving, patriotic wife of over 56 years, his very accomplished sons Danilo and Jaime, his daughter-in-law Priscilla and his precious granddaughters Elizabeth and Gabriella. He was preceded in death by his father Emil, his mother Laura and his two brothers Bill and Chuck who he played baseball, hockey, football, and many other sports with for many happy years in the outskirts of Detroit, Michigan. Jim served in the Army with distinction for over 40 years enlisting as a private in the 95th Infantry Division at the beginning of WWII. Subsequently, he was commissioned as a 2nd LT in the Corps of Engineers where he served in the African, Italian and Central European Campaigns. After WWII, he served in Korea and Vietnam, then as a Civilian in the US Army Readiness and Development Command. Jim received numerous awards and decorations to include the French Croix D Guerre Aval Etoile D Argent (French Cross of War with Silver Star) awarded to him by the French government. Of course, the biggest honor of all was the opportunity to serve our great country, not only in WWII, but for many years after. Jim lived a wonderful life and was very proud of his family and heritage. He loved to fish and told many stories of his brothers, sports, and the great outdoors. Friends & family are welcome to come pay respects on December 11th from 3pm-7pm at Jefferson Funeral Chapel. Located at 5755 Castlewellan Dr. Alexandria, VA 22315. (703) 971-7400. Interment will be held with full military honors at Arlington National Cemetery in 4-5 months. In lieu of flowers, memorial contributions may be made to: Good Shephard Catholic Church of Mount Vernon https://www.gs-cc.org/donate/ Or the Wounded Warrior Project https://support.woundedwarriorproject.org/donate

LTC James E Stapula Born in Milwaukee, Wisconsin on January 11th, 1922, Jim passed away on December 4, 2021, at 99 years old. He is survived by Noemi, his very loving, patriotic wife of over 56 years, his very accomplished sons Danilo and... View Obituary & Service Information

The family of LTC James E. Stapula created this Life Tributes page to make it easy to share your memories.

Send flowers to the Stapula family.