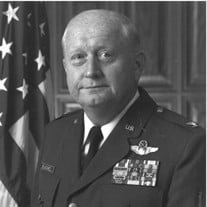 Colonel (Ret) James R. Blackwell, USAF, of Alexandria, VA., passed away on April 25, 2020, from complications due to the Coronavirus Disease (COVID-19). He is survived by his loving family, his wife of 45 years, Maureen (Missie), sons: Brian M. Fromm, Kevin M. Blackwell and Colin J. Blackwell, sisters: Mary L. Heller (Rick) and Virginia W. Inglefinger, sisters-in-law, N. Ellen Wagner, Joan A. Donnelly, and several nieces and nephews. Jim was predeceased by his parents Virginia W. Omohundro and E. Earl Blackwell, his brothers Howard U. Omohundro, Frederic L. Omohundro and sister, Judith A. Infante. Jim was born on July 20, 1934, in Providence, KY. He attended Western Kentucky State College for three years. Needing just six hours to complete his Bachelor’s Degree, he received his appointment to the newly created USAF Academy, where he transferred in 1955. Jim was a member of the First Graduating Class of the United States Air Force Academy, the Class of 1959, earning his Bachelor’s in Engineering. In 1968, Jim earned two Master’s degrees in Systems Engineering and Engineering Management from Arizona State University. Jim Flew over 8,800 hours as a C-130 and C-123 command pilot, including over 900 combat missions during 3 separate tours in Vietnam, while serving in MACV-SOG, First Flight Detachment. Following his special operations and other flying assignments, Jim served in various staff officer and command positions, including the Joint Chiefs of Staff, Plans and Policy Directorate, where he was a member of the U.S. MBFR Delegation. In 1979, he completed the National War College before serving as Director of Operations, then Vice Wing Commander, of the 375th Aeromedical Airlift Wing, Scott AFB, IL. His last assignment was at the State Department as Chairman, Interagency Consolidated Verification Group (CVG), and Chairman, Arms Control Verification Committee’s Policy Working Group, which encompassed U.S. planning efforts of the INF and START Arms Control Treaties. After serving 28 years in the Air Force, Jim entered the private sector managing national security programs for the Departments of Defense and Energy. Over the next 26 years, he served as Associate Partner, Meridian Corporation; Vice President and Chief Operating Officer DynMeridian and DynCorp; and Director of Nuclear Security and Energy Programs, Computer Sciences Corporation. Jim’s USAF Academy yearbook reads, “He had an intense interest in anything that is fun. Jim made his claim to fame in Football and Baseball and as Chairman of the Entertainment Committee. One of the most likeable guys around, Jim never let the rigorous Academy atmosphere get the best of his social life.” Years later Jim would recall humorous experiences leading the Entertainment Committee, which brought out laughter from his fellow classmates. Jim faithfully watched Falcon Football (USAF Academy Football) every season, no matter what time it came on in the East Coast. Jim also enjoyed watching Western Kentucky Basketball every year. He grew up in Northern Virginia where he developed an early passion for sports, playing baseball, basketball and football. He attended Washington Senators and Washington Redskins games at Griffith Stadium. Later he cheered on the Reskins, Nationals, Capitals and Bullets/Wizards, savoring their Championship titles,. He was also an avid reader of history, the Civil War and sports, possessing a sharp mind and an amazing grasp for detail his entire life. He always looked forward to his Class Reunions. The last ‘59er class gathering he attended was the Air Force Museum at Wright-Patterson AFB, Ohio, for the 2018 dedication of the USAFA First Class Memorial. Throughout his career and life, Jim was a patriot, mentor and leader who brought out the best in people with his warm demeanor and wonderful sense of humor. Jim was devoted husband, father, sibling, colleague and a good friend to everyone. He will be greatly missed.

Colonel (Ret) James R. Blackwell, USAF, of Alexandria, VA., passed away on April 25, 2020, from complications due to the Coronavirus Disease (COVID-19). He is survived by his loving family, his wife of 45 years, Maureen (Missie), sons: Brian... View Obituary & Service Information

The family of James R. Blackwell created this Life Tributes page to make it easy to share your memories.

Send flowers to the Blackwell family.