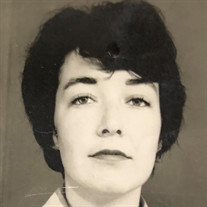 Isabel Ann “Scottie” Dalsimer of Alexandria, VA, died February 17, 2022 at the hospice wing of Alexandria INOVA hospital. She is survived by her two daughters, Ally and Melanie; her two grandchildren, Kyle and Isabel; her ex-husband, Anthony Dalsimer; her brother-in-law, Gene Gordon, nephew Dylan Gordon, niece Jenn Eichner, and extended family and friends from Florida to Canada, Australia to Africa, and in Scotland and Wales, U.K. Scottie was born in Glasgow, Scotland – which is how she earned her nickname. She immigrated to the U.S. with her parents and sister, Eleanor, who pre-deceased her, after WW2 at age 11. She graduated high school and went to Westminster College when she was just 15 years old. After graduating with a degree in Political Science, and despite being a woman in the 50s, she was recruited by several top graduate schools, and eventually chose the Fletcher School of Law & Diplomacy on a full scholarship. While at Fletcher, she met Tony Dalsimer, whom she later married. In 1958, Scottie received her M.A. in International Affairs, then went to Washington, DC to work as the executive assistant to Gordon Hagberg, Director of the African American Institute (AAI). She held this position from 1958-1961, after which she accompanied her new husband to Ouagadougou, Upper Volta (now Burkina Faso) where she became the Public Affairs Asst at the Embassy's US Information Service (USIS) office from 1961-1963, and where she was blood-oathed into an African family by her friend Awa Konate whom she loved dearly. She returned to the U.S. when her father-in-law passed and for the birth of her first child, Ally, then returned to Africa where she served as a Public Affairs Officer in Bamako, Mali. In 1965, the family moved to Hargeisa, Northern Somalia where she stayed until she went to Nairobi to give birth to her second child, Melanie. From Hargeisa, she went to Kinshasa, Democratic Republic of the Congo from 1967-1969, then to Bukavu, Congo (1969-71), where she set up literacy, family planning, and women’s rights programs (e.g., an anti-cliteradectomy campaign). In 1969, Scottie returned to the U.S., and in 1972 moved to Northern Virginia. She was active in the local Democratic party, the women’s movement, and the civil rights movement, continuing her work with the African American Institute, and teaching English as a second language in the local elementary and middle schools. As part of her duties with AAI, she escorted visiting African dignitaries around D.C., desegregating several department stores, including Garfinkel’s, by taking the wives of African leaders and diplomats shopping when they visited. Scottie spent the next three decades working in support of environmental, safety, and consumer protection efforts, from helping Dave Depner set up Trees for the Future, to conducting an underground oil storage tank assessment for the EPA and helping write the Oil Pollution Act of 1990, to working on the team analyzing impacts from the first airbag studies. Her work has had and will continue to have lasting impacts. She was also proud of her friendship and work with Civil Rights leader Jim Farmer. They were dear friends and, when he decided to write his memoir, he asked Scottie to move to his Fredericksburg home so they could collaborate; Jim wrote during the day, and Scottie would edit and revise overnight. They’d discuss the changes over breakfast, then repeat the cycle. More than anything though, she was proud of her children and even more proud of her grandchildren, whom she loved unconditionally with all her heart. Before she became too ill to live on her own, she visited her daughter Ally and her grandkids every Sunday for church (until covid), lunch, and an afternoon or evening of stories, games, laughter, and just visiting. During the last few weeks of her life, she moved in with her daughter and grandkids, telling stories about her amazing and adventure-filled life and the incredible people she met, including President Eisenhower, Bobby and Ethel Kennedy, Salvador Dali, Maurizio Gucci, Gus Savalas, and William Close among others. Scottie loved life, loved people, loved laughter. She loved history, trivia, politics, doing crossword puzzles, watching Jeopardy, and was an avid reader. Although she became blind in 2000, she stayed active and engaged until the end. She will be missed by many, many people from her long-time friends to the caregivers she met shortly before she passed. A memorial celebration will be held later this Spring. Details will be posted on this site in the next few weeks.

Isabel Ann &#8220;Scottie&#8221; Dalsimer of Alexandria, VA, died February 17, 2022 at the hospice wing of Alexandria INOVA hospital. She is survived by her two daughters, Ally and Melanie; her two grandchildren, Kyle and Isabel; her ex-husband,... View Obituary & Service Information

The family of Isabel Ann Dalsimer created this Life Tributes page to make it easy to share your memories.