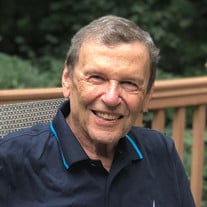 Irwin Schneider (89) passed away on Tuesday, December 21, 2021, at his home in Springfield, VA. He is survived by his loving wife of 62 years, Harriet Schneider, daughter, Andrea Rozner, son, Steve Schneider, son-in-law, Gil Rozner, and grandchildren, David, Laura, Jessica, and Nathan. Irwin is predeceased by his parents, David and Bertha Schneider, and sisters, Sylvia Blumenfeld and Lillian Rosenthal. He will truly be missed by many. Irwin was born in New York City and spent most of his childhood in the Bronx. He earned his B.S. and M.S. at the University of Illinois and his PhD. in Physics at the University of Pennsylvania. After completing his post-doc at MIT, he and his family moved to Alexandria, Virginia so he could start his career as a research physicist at the U.S. Naval Research Laboratory in Washington, DC. He earned numerous patents and accolades, including both the Meritorious Service and the Sigma Xi Awards. Irwin enjoyed sports and was an avid tennis player and golfer. He was an outstanding photographer, collected American stamps, and was passionate about music, accruing a large, eclectic collection. He also loved sudoku and could solve the most difficult puzzles. Funeral Service will take place at the Greenspring Village Chapel, 7430 Spring Village Drive, Springfield, VA on Thursday, December 23, 2021 at 1:00PM followed by Interment at the Agudas Achim Cemetery, Alexandria, VA. In lieu of flowers, memorial contributions may be made to the Alzheimer’s Association. Please view and sign the family guestbook.

The family of Irwin Schneider created this Life Tributes page to make it easy to share your memories.