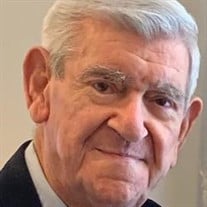 Herman D. Verbano (92) Passed away peacefully on Thursday, August 5, 2021 at his home in Alexandria, VA. Beloved husband for 68 years of Elizabeth A. Verbano; cherished father of Carol Iacone, Patricia Greksouk (Nicholas), David Verbano (Kathy), Teresa Walsh and Mary Beth Baucia (Chris); Brother of Donald Verbano; grandfather of 13: great-grandfather of 13. Herman was predeceased by his parents, 5 brothers, and 1 sister. He will truly be missed by many. Herman was born on January 30, 1929 in Johnstown, Pennsylvania to Amelia and Dominick Verbano. He was a military veteran who served with the U. S. Army in Korea. In 1958, he moved his family to Virginia and began his career as a firefighter with the D. C. Fire Department where he served for 22 years. He was a member of the Retired Firefighter's Association of Washington, D. C. He was an honorary life member of the Knights of Columbus in Arlington, Virginia where he enjoyed volunteering for various functions, and a life member of the Washington D. C. VFW. He was an avid golfer, enjoyed cooking and was happiest when surrounded by his family. Gathering will be held at Jefferson Funeral Chapel, 5755 Castlewellan Dr. Alexandria, VA 22315 on Sunday, August 15, 2021 from 6-8PM. Memorial Mass of the Christian burial will be held at St. Lawrence Catholic Church, 6222 Franconia Rd. Alexandria, VA 22310 on Monday, August 16, 2021 at 11AM. Inurnment to follow at Quantico National Cemetery Triangle, VA at 2:30PM. In lieu of flowers, memorial contributions may be made in his honor to St. Lawrence or Good Shepherd Catholic Church of Alexandria, VA.

The family of Herman D. Verbano created this Life Tributes page to make it easy to share your memories.

Send flowers to the Verbano family.