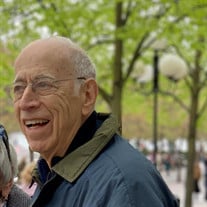 Dr. Henry M. Botuck was diagnosed with a cancerous brain tumor (Glioblastoma) in November 2020, and died surrounded by his family on March 31, 2022 at 89 years of age. He is survived by his loving wife of almost 66 years, Joan Botuck; his three daughters, Linda Botuck-Murphy (Joseph Murphy, deceased), Deborah Botuck (James Campbell), Ruth Berger (Bary Berger); his seven grandchildren, Allison Murphy Cunningham (Brendan Cunningham), Danny Murphy (Stephanie Moore-Murphy), Ryan Campbell, Rachel Berger, Sarah Berger, Jessica Campbell, David Berger; and his great-grandson, Levi Joseph Murphy. On Monday, April 4, a funeral service will be held at Temple Rodef Shalom (TRS) in Falls Church, VA, at 12:30pm. Masks required. (Streaming of service is available at templerodefshalom.org/live/ ) Interment at King David Cemetery, Falls Church, VA. will follow at 2:00pm. Shiva minyans 7:30pm, Monday,Tuesday, and Wednesday at Greenspring, Springfield, VA. Dr. Botuck was a general dentist for 50 years, receiving many accolades, including a Lifetime Achievement Award, during his notable career. He held numerous leadership positions and was involved in many committees with the Northern Virginia Dental Society and the Virginia Dental Association. His family grieves the loss of this loving, caring, compassionate, generous, quick-witted, talkative, intelligent man who was always there to lend a hand, give advice, laugh uproariously, and spread joy. Henry and his wife, Joan, spent almost 66 years of marriage in a supportive, deeply- loving relationship where they were true partners, lovers and best friends. His three children and seven grandchildren were blessed to have such an attentive, “hands-on” father and “Grandpa” who was always interested in their day to day lives. He was a proud father, grandfather, and great-grandfather. Henry grew up in Detroit, Michigan with his parents and sister, Judith. He held many jobs in his youth, including a paper route for the Detroit Free Press (which was how he financed his tuition for Dental School) and working at Stroh’s Brewery. He graduated from the University of Detroit Dental School in 1957 with a DDS degree. Joan and Henry met at a B’nai Brith dance during college and married in 1956. Henry joined the U.S. Army after completion of dental school and was stationed at Ft. Belvoir, in Virginia. In 1958, he opened his private dental practice near Bailey’s Crossroads. He moved his office to Alexandria after a few years, and he continued to work there throughout his career. When he retired in 2006, Henry sold his dental practice and continued working part-time for a few more years. After he retired, he donated his time once a week to caring for patients at the Northern Virginia Dental Clinic, a facility where low-income residents throughout Northern Virginia can access oral health care services. Henry and Joan joined Agudas Achim Congregation in Alexandria, Virginia in 1957, where they are still members today after 65 years. There they formed many lasting friendships and celebrated many happy occasions including their daughters’ Bat Mitzvahs. They were avid theatre-goers and supporters of Arena Stage, Signature Theatre, and 1st Stage. They often travelled together within the U.S. and to other countries where they had wonderful adventures. Their fortunate grandchildren went on “Elderhostels” at different locations across the U.S. In addition, they were gifted with overseas excursions as college graduation gifts where they bonded and created many fond memories together. Henry offered his children and grandchildren unconditional love. They were a huge part of his life, getting together often for everything from Seders with the Edelmans, game nights, dinners, movies, celebrations, FaceTime calls, and more, and with zoom-celebrations and zoom-gamenights during the pandemic. His uproarious, contagious laughter was always a part of our gatherings, even after his diagnosis. He loved to regale people with his “shaggy- dog stories” and Dad jokes or puns whenever he had a willing listener. Donations in Henry’s honor may be made to the Capital Area Food Bank (capitalareafoodbank.org), or The Northern Virginia Dental Clinic (novadentalclinic.org).

Dr. Henry M. Botuck was diagnosed with a cancerous brain tumor (Glioblastoma) in November 2020, and died surrounded by his family on March 31, 2022 at 89 years of age. He is survived by his loving wife of almost 66 years, Joan Botuck; his three... View Obituary & Service Information

The family of Henry Mordecai Botuck created this Life Tributes page to make it easy to share your memories.