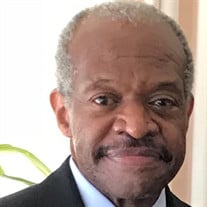 Gilbert Joseph McWane Sr. (Mac McWane) Gilbert Joseph McWane, Sr. (Mac) transitioned from this life on April 25, 2020 at Virginia Hospital Center in Arlington, Virginia. Mac was recovering from a stroke and passed away from complications caused by the novel COVID-19 pandemic. He was 73. Mac was born in Philadelphia, Pennsylvania on June 23, 1946 and was the fourth of four children born to Walter and Nancy Mae McWane. He spent his early years in Philadelphia before joining the Navy in October 1965. His loving wife of 40 years, Chieko Elizabeth McWane, preceded him in death on June 22, 2010. He was also predeceased by both of his parents, brother Walter Jr. and sister Annabelle. A brother, Odell McWane, of Fresno, California and son, Gilbert Jr. (Taneil) of Harrisburg, Pennsylvania survives him. Mac and his family were long-time residents of West Springfield and Fairfax Station, Virginia, settling in the area in 1982. Prior to that, the family maintained homes in Hawaii, Alaska, Japan, Philadelphia, California and Virginia Beach. Mr. McWane served twenty years in the U.S. Navy retiring in October 1985 as a Commissioned Warrant Officer in the Navy Supply Corps. His initial tour in the Navy was aboard an Ocean Minesweeper (MSO) operating in and around the coastal waters and harbors of Vietnam as part of that conflict during 1966- 1967. The sailors on these ships were referred to as the “Iron Men on Wooden Ships” because the ships were constructed of wood for mine countermeasure purposes. Subsequent tours included duty aboard diving and rescue ships, an aircraft carrier, overseas afloat staffs and various shore installations that included Adak, Alaska, east and west coast locations and deployments to Southeast Asia and the Mediterranean. Mr. McWane earned an MBA from George Washington University and a BS in Management from the University of Maryland. After retiring from the Navy, he worked as a management consultant specializing in Navy Logistics for Advanced Technology Incorporated. In 1990 he started his first management consulting firm (MACI), providing logistics, information management, and management services in support of a number of federal government agencies across the nation and overseas. The company at its peak employed 400 full time personnel and was recognized by INC 500 as the 117th fastest growing small private company in America. In 2003, he started a second company, Compass Solutions Corporation and merged the two companies in 2005, supporting new government clients in addition to the agencies supported prior to the merger. Mac is also survived by his grandchildren Marcel McWane (Monae), Kaliyah McWane, Kamiko McWane, and Davon Cross; great-granddaughter Makyla (Kai) McWane; great-grandson Malachi; niece Tifani McWane and her four children as well as a host of loving cousins, relatives, and friends. Memorial and Inurnment with Military Honors will be held at a later date at Arlington National Cemetery where he will re-join his beloved wife, Chieko.

The family of Gilbert J. McWane Sr. created this Life Tributes page to make it easy to share your memories.

Send flowers to the McWane family.