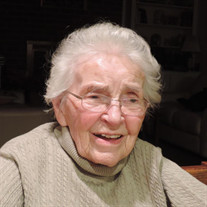 Gertrud Gredinger Philips passed away on Monday, January 24, 2022, at the age of 96. Born in Wurzburg, Germany, on June 27, 1925, to Hans and Maria Gredinger, Gerti was the youngest of three daughters. After World War II, she worked in the U.S. Army Hospital in her hometown, where she met and married her husband Charles William Philips (deceased). As a military couple, Charlie and Gerti lived in France, Germany, and various places in the United States, ultimately retiring in Northern Virginia. Together they created a warm, welcoming home wherever they lived, open to friends and family members near and far. Gerti was an active member of the Catholic military parish in each place she lived, for several years serving as the organist at Fort Lee. A spirited advocate on behalf of those in need, she was always involved in providing food and other services. For more than thirty years, she cooked meals for Christ House through the Fort Belvoir Catholic women’s group and volunteered on local and national Democratic campaigns. Among family and friends, she shared her love of German food, music, and traditions. In her later years, she was known to her grandchildren’s friends and many others as “Oma.” Gerti is survived by daughters Rosemarie Philips (Clement Bezold) and Anita Gendron; grandchildren Nicole Gendron (Larnell Howard), Carla Bezold (Liz Nelson), Angela Hodson (Bryan Hodson), and Mark Bezold; and great grandchildren Kayla Gendron-Howard and Will and Mason Hodson. A Funeral Mass will be held at Good Shepherd Catholic Church on Tuesday, March 8, 2022, at noon, followed by a private family burial at Arlington National Cemetery. The livestream link to join the Mass remotely is: https://youtu.be/onqCvgavW3g In lieu of flowers, and in the spirit of Gerti’s life and values, please consider making a contribution to your own favorite charity or doing an unexpected act of kindness.

Gertrud Gredinger Philips passed away on Monday, January 24, 2022, at the age of 96. Born in Wurzburg, Germany, on June 27, 1925, to Hans and Maria Gredinger, Gerti was the youngest of three daughters. After World War II, she worked in the U.S.... View Obituary & Service Information

The family of Gertrud Gredinger Philips created this Life Tributes page to make it easy to share your memories.