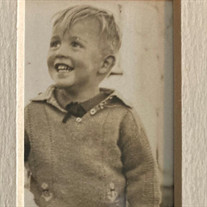 Fred Byers Warren, devoted husband and father, died peacefully on Monday June 7 after a protracted illness. He retired from the US Department of Agriculture after 40 years as a statistician and was an active volunteer in the church and community. Fred was born on July 21, 1929 in White Rock, Jewell County, Kansas, the son of farmer Ronald Warren and school teacher and journalist Ellen Morlan Warren. Fred was an avid reader during grade school and didn’t mind if he was sent to his room as “punishment”. His interest in learning led to honors throughout, and an Agriculture degree from Kansas State. He then enlisted in the Kansas National Guard. He transferred to the US Air Force and was stationed in Japan during the Korean War. He developed a love for Asian culture and food while overseas— once home, this meant driving 20 miles to the local Chinatown to buy something as rudimentary as soy sauce! After his honorable discharge Fred moved to Columbus, Ohio and began work at the USDA.. God had more in store. Fred joined “Guys and Gals”, a social group at the local Methodist Church. There he met the love of his life, Wanda, and immediately asked her out for ice cream. They were so compatible that they married a few short months later! Fred and Wanda started a family and had Mary and Joseph, the first two of their three children. They relocated to the Annandale, VA area where they had Ron, their third child. Fred attended The University of North Carolina where he earned a Masters Degree in Statistics. After residing in Annandale for 55 years, he and Wanda moved to Springfield, Virginia. Fred developed mathematical models to predict crop yields as a function of weather. He was among the first to use LANDSAT satellite information to assess crop health and yields. To fulfill his job, he was sent all over the US and to overseas locations to do crop surveys and project agricultural production. His travels took him to places as diverse as Missouri, Washington State, Hawaii, Upper Volta and the Ivory Coast. Fred and Wanda took personal trips around the US as well as overseas trips to Germany, Ireland, the UK, China, Peru, Bonaire, Mexico, and Canada. For many years they traveled west to visit Wanda’s relatives in Ohio and Fred’s parents and other relatives in KS. Fred was always up for a game of softball or volleyball or other outdoor games. Fred was an avid gardener, transforming their grounds into a miniature orchard and farm. He planted and enjoyed the fruits of apple trees, grape vines, and blueberry bushes. He planted a vegetable garden each year and enjoyed the squash, peppers, tomatoes, kale, lettuces and beans it produced. He also planted extensive flower beds on the property.. Every farm has at least one housecat!   Fred was a key part of the vibrancy for many decades of Immanuel United Methodist Church. He had multiple leadership roles in finance, stewardship and participating in the Annual Conference as a delegate. He also volunteered for many tasks around the church as well as at The Annandale Christian Community for Action. He picked up and delivered furniture for those in need, as well as volunteering at their Food Bank. His zeal for local Christian community evolved in later years to involvement with Saint Barnabas Episcopal Church (choir), St. Francis Episcopal Church, Springfield United Methodist Church (lay reader) and The Village Church at Greenspring. Remote attendance at St. Bernard RC Church kept his spirit nourished during the pandemic. Fred took adult leadership roles in BSA troop 1502, ultimately becoming the Troop Scoutmaster. Fred enjoyed camping and backpacking, taking the troop on scores of weekend trips and many years of summer trips to Goshen Scout Camp. Fred was inevitably the winner of the Scoutmaster/Sr Patrol Leader joint marksmanship competition. He enjoyed picking blackberries and making cobbler out of them at camp, and taking any leftovers home to make blackberry ice-cream. Fred’s post-retirement interests, with Wanda, included New Earth and Landmark Education. His congenial personality and many skills contributed to many friendships within those organizations. More recently, his lifelong love of singing found a home with a local choral group. Fred is survived by his wife and life partner of 64 years, Wanda Archer Warren; his sister Patricia Warren Cary (Wichita, KS), his brother Samuel Warren and sister-in-law Karen West Warren (Mt. Airy, MD); his children and their spouses Mary Warren Breslin (Patrick), Joseph William Warren (Margaret), Ronald Archer Warren (Nicholas Borelli III), his grandchildren Matthew Warren, Patrick Warren, Azay Breslin, and Kayla Breslin, three great grandchildren; 16 nieces and nephews. Sister Elizabeth Warren Atkinson (Grand Junction, CO) preceded him in death. A Celebration of Life will be held on July 17, 12 pm, at The Village Church, 7418 Spring Village Drive, Springfield, VA. (A security gate is in place so time needs to be planned to go through it. Parking will be reserved.) In lieu of flowers, please make a donation to the charity of your choice, or to the Greenspring Benevolent Fund.

Fred Byers Warren, devoted husband and father, died peacefully on Monday June 7 after a protracted illness. He retired from the US Department of Agriculture after 40 years as a statistician and was an active volunteer in the church and community. Fred... View Obituary & Service Information

The family of Fred Byers Warren created this Life Tributes page to make it easy to share your memories.