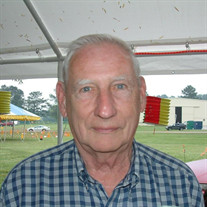 Frank L. Reynolds Jr, a senior intelligence and Air Force officer died peacefully on June 11th, 2020 at age 90. He is survived by his sons, F. Kevin Reynolds, (Stacey) of Oakton and K. Scott Reynolds of the District of Columbia, and daughter, Elizabeth R. Agather (USA retired) (Steve) of Raleigh, NC, and four grandchildren; Brooke and Brandon Reynolds and Jennifer and Thomas Agather, and his beloved dog Amy. He was preceded in death by his wife of 53 years, Emily Brown Reynolds, in 2006. Mr. Reynolds served over three decades with the Central Intelligence Agency, where he held numerous leadership positions to include the Director of the Office of Current Production and Analysis Support where he supervised several hundred analysts and directed production of the President's Daily Brief and the National Intelligence Daily. He also directed the CIA Operations Center where he enhanced Equal Employment Opportunity in the office which employed the largest minority population in the Directorate of Intelligence. As an expert in Soviet and Cuba military matters, he frequently briefed congressional leaders and foreign heads of state. As Director of the Office of African and Latin American Analysis, he briefed the Senate and House Foreign Relations, Armed Services and Oversight committees. Additionally, he performed duties as the CIA representative to the U.S. Pacific Command in Hawaii. Mr. Reynolds served the US Air Force as a reserve intelligence officer for 28 years after being drafted for the Korean War with a final assignment as commander of the Metropolitan Washington area Air Force Reserve. He retired with the rank of Colonel. Mr. Reynolds received numerous awards and commendations during his service to include in support of Desert Storm and the Arab/Israel war. He received the Distinguished Intelligence Medal from the CIA and the Legion of Merit from the USAF. Mr. Reynolds received a B.A. from Louisiana Tech in 1950, an M.A. from Vanderbilt University in 1951 and pursued doctoral studies at Northwestern University from 1954 - 1956. He was a 1970 graduate of the Air War College. After his retirement from the CIA in 1992, he served as First Vice Chairman of the Arlington County Republican Committee and several committees supporting John Warner’s Congressional and Senate campaigns. He also served on campaigns for Earle Williams (Governor) and David Foster (Arlington School Board). He was an avid duck and goose hunter, fisherman and member of the American Kennel Association; he raised and showed boxers and papillon dogs. Frank was a proud Eagle Scout and an accomplished sports fan as a supporter of UVA athletics, the Nationals and dedicated Redskins ticket holder. He served on the vestry as a deacon at St. George's Episcopal Church in Arlington and, later, was a member of the Church of the Holy Comforter in Vienna. In lieu of flowers, the family requests you consider donating to your favorite charity, the Church of the Holy Comforter (Vienna, VA), Duck's Unlimited or UVA Athletics in his honor.

Frank L. Reynolds Jr, a senior intelligence and Air Force officer died peacefully on June 11th, 2020 at age 90. He is survived by his sons, F. Kevin Reynolds, (Stacey) of Oakton and K. Scott Reynolds of the District of Columbia, and daughter,... View Obituary & Service Information

The family of Frank L. Reynolds Jr. created this Life Tributes page to make it easy to share your memories.