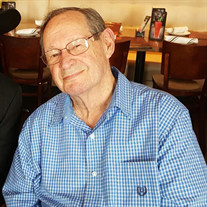 Longtime Alexandria resident Frank H. Harrison passed away on January 27, 2022 in his retirement community, Sun City Center, Florida. He is survived by his loving wife, Yolanda, and five of his six children: Robert L. Barr (Annette), Cindi B. Jones (TC), Gayle H. Clary, Tracey H. Halman (Chuck), and Amy E. Harrison (Michael Beaulieu). Frank lost his wife of 48 years, Elaine, in 2010, and his son, Michael A. Barr (survived by wife Robin), in 2020. Frank grew up in a large, tight-knit family in the Del Ray community in Alexandria, attending George Washington (GW) high school. He remained close to his family and childhood friends throughout his life. He loved hosting and attending parties and going out to dinner. A gifted athlete, Frank played basketball for the Army when he was stationed in Europe after the Korean War. He also played minor league baseball and once tried out for the Pittsburgh Pirates. He was a loyal Red Sox and Redskins fan, attending football games every Sunday and going to the Super Bowl twice. Frank was incredibly proud to be able to give his children opportunities he never had, paying for their college and setting them up for their future careers. At 50, Frank started a commercial floor covering business, Virginia Floors, in South Alexandria. He grew his highly successful business for more than 20 years, selling the company when he was ready to retire. Frank is survived by many grandchildren and great grandchildren: Sean Barr (son Max); Jessie Gorey (husband Brandon); Jayme Ward (husband Shawn and children Violet, Everett, and Stella); Danny Bowling; Stephen Clary (wife Allison); Jason Clary (daughter Skylar); Jake, Seth, and Emma Halman; and Ana, Noel, and Gabriela Beaulieu. Relatives and friends may call at Jefferson Funeral Chapel, 5755 Castlewellan Dr., Alexandria, VA 22315, Friday, February 11, from 3-5PM and 7-9PM. A funeral ceremony will be held privately.

The family of Frank Howard Harrison created this Life Tributes page to make it easy to share your memories.

Send flowers to the Harrison family.