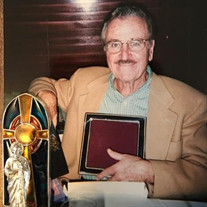 Francis B. O’Hara (Frank) Of Alexandria, Virginia, passed peacefully in his home with family by his side on December 17, 2020. He is the beloved husband of Mirza O’Hara; loving father of Brian O’Hara and Diana O’Hara Romero (Gustavo – Son in Law); cherished grandfather of Brooke, Kaitlyn and Brandon O’Hara, and Faith and Franco Romero, and uncle of Colleen O’Hara and Yasmine. Born in Boston, Massachusetts in 1926 to Irish parents, he served as Aviation Radioman in the U.S. Navy during World War 2. Frank attended Holy Cross University and played Tight End on his college football team. Later, he attended Boston College. He was ordained in 1955 in New York as a Maryknoll priest. Shortly thereafter, he became a Catholic missionary in Bolivia where he worked and lived in Cochabamba, La Paz and many other regions. Frank was a fluent Spanish speaker and he also learned Aymara, which was helpful when traveling to the Altiplano region and speaking with the people of the Bolivian Andes. In the early 70’s, he returned back to civil life in the United States. In 1972, he married Mirza O’Hara and had two children, Brian and Diana. In 1979, he became Director of the Peace Corps in Paraguay, where he lived with his wife and children for 5 years. After a brief return to the Washington D.C. area, he began working at the Inter-American Development Bank (IADB) in the area of development and implementation of loan programs in Paraguay and Costa Rica, where he and his family lived for nine years. Frank retired from the IADB in 1988 but continued to be heavily involved in volunteer work at the Fairfax County Jail Catechesis program, where he prepared inmates, mainly of Latin descent and gave them faith in God and also strength to believe in themselves as they transitioned back into society. Frank was passionate about his devotion to his savior, Jesus Christ, and fought hard for the plight of the poor. He adored the Virgin Mary and the revelation of her miracles. He was a faithful Catholic and active parishioner at St. Louis Catholic Church. He was a charismatic communicator and had a wonderfully caring voice. He loved the Boston Red Sox, Thanksgiving and Christmas time, tennis, football, swimming and chocolate chip ice cream. He will be remembered by all who knew him as a loving, generous, supportive, funny, thoughtful and gracious man, who loved his family very much. He was an amazing father, a loving husband, and loyal friend. A private viewing will be held at Jefferson Funeral Chapel. Mass of Christian Burial will be held at St. Louis Catholic Church, 2907 Popkins Lane, Alexandria, Virginia 22306 on Wednesday, December 23 at 12PM. In lieu of flowers, the family would appreciate donations be made in Frank’s name to: Catholic Relief Services https://www.crs.org/ or to the Trappist community at the Santa María de Miraflores Monastery in Rancagua, Chile – through the St. Cloud Diocese in Minnesota http://mission.stcdio.org/mission-office-homepage/global-solidarity/global-connections/chile/

The family of Francis "Frank" B. O'Hara created this Life Tributes page to make it easy to share your memories.

Send flowers to the O'Hara family.