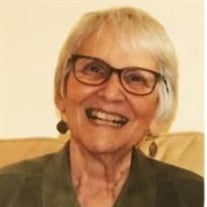 FRANCES MARIE WATTS (nee Wagner) January 11, 1933 – February 11, 2022 Mom, that special lady who loves you whole heartedly and unconditionally. The one who stands with you when life is good and when life isn’t so good. The one who remains forever devoted to you and is the one constant in your life. That was Frances Marie Watts, our mom. Our mom, Frances, passed on February 11, 2022 at the age of 89 after succumbing to the effects of dementia. Her determination and fight to live in spite of her illness has been inspirational and has filled our hearts with love. Frances was born in Chicago, IL on January 11, 1933 to George P. Wagner and Mary C. Wagner (nee Purcell) and was the third of their four children. Her family moved from Chicago to Washington, DC when she was still very young. Frances attended St. Peter School, the very first Catholic elementary school of Washington, DC. She and her siblings loved St. Peter and it helped to build a strong foundation for her Catholic faith. In 1944 her family moved to Arlington, VA. Frances went on to attend St. Mary’s Academy in Alexandria, VA where she grew even stronger in her faith. She graduated from St. Mary’s in 1949 at the age of 16. St. Mary’s held a very special place in her heart for the rest of her life. It is also where she met Mary Ford, a best friend forever. Upon high school graduation Frances entered the work force and held an office position with an insurance company. At this time, she was also a member of a sorority, Tau Beta Phi. She and several of her sorority sisters remained dearest of friends for the rest of their lives, friendships spanning almost 70 years. On October 8, 1952 she married the love of her life, Hugh E. Watts, Jr. They began their life together in Arlington and eventually started a family. After the birth of five children and a sixth child on the way, their ever-growing family needed a bigger house. In 1962 Frances and Hugh moved the family to Rose Hill, a new community being built in Alexandria, VA. They completed their family with the birth of their seventh child. Frances loved Rose Hill and the block she lived on. She enjoyed the morning walks around the block and teas with the other stay-at-home moms, their young children in tow. She learned to play bridge and joined the bridge group on the block. It’s here where she made even more dear friends who remained so very close to her heart the rest of her life. Frances spent 21 years as a homemaker and a stay-at-home mom devoting herself entirely to her family. She eventually re-entered the work force in 1974 taking a position with the Department of Army. She loved her job and found it very rewarding. In 1989 she lost her husband Hugh and found solace in her children and grandchildren. She retired in 1993 as an Administrative Officer. Frances thoroughly enjoyed her retirement years. She was an avid reader and after a library run would come home with her arms full of books. She was a social person who enjoyed spending time with all her friends. She travelled some but really preferred to be home because to her there was no place like it. She enjoyed her grandchildren to the fullest. They believed there to be no other grandma in the world as wonderful, loving, attentive and devoted as their Grandma Fran. She was overjoyed when the great-grandchildren arrived and delighted in each and every one of them. She took great pride in her grands and greats and they filled her heart with so much joy. Frances, our mom, will forever be remembered for her tremendous love of family, friends and faith. She was a devoted and loving wife to Dad and an exceptional mother and mother-in-law to all of us. She had a particular way of making all her grandchildren and great-grandchildren feel special. Her nieces and nephews were dear to her heart. She had wonderful friends and was a wonderful friend to so many. We admired her strong and unwavering belief in her faith. We will miss you Mom but know you will live forever in our hearts. In addition to her parents and her husband, Frances was preceded in death by her two sisters and their husbands Sarah E. Gray (James) and Catherine L. Reingruber (Walter) and her brother George P. Wagner, Jr. She was also preceded in death by her brother-in-law and sister-in-law Dwin R. and Virginia L. Craig and her niece Barbara L. Gourley. She is survived by her seven children Hugh E. Watts, III (Dawn), Mary K. Lowe (Rick), George F. Watts (Karen), Michael R. Watts (Adelaida), Elizabeth A. Watts, Jean M. Mallory (John) and Barbara L. Whitney, her 11 grandchildren and her 13 great-grandchildren. She is also survived by her dear sister-in-law Adele D. (Lee) Wagner, her cherished nieces and nephews and several special and dear life-long friends. In lieu of flowers a donation may be made in Frances’s memory to Capital Caring at www.capitalcaring.org.

FRANCES MARIE WATTS (nee Wagner) January 11, 1933 &#8211; February 11, 2022 Mom, that special lady who loves you whole heartedly and unconditionally. The one who stands with you when life is good and when life isn&#8217;t so good. The... View Obituary & Service Information

The family of Frances Marie Watts created this Life Tributes page to make it easy to share your memories.

Send flowers to the Watts family.