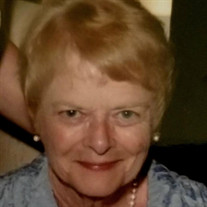 Florence Irene Smoczynski of Springfield, VA, 82, passed away on Saturday, June 5, 2021 Florence was predeceased by her husband Hubert of 55 years. She is survived by her two children, Edward M. Smoczynski, Mary Ellen Torres her husband Michael as well as numerous nieces, nephews, and friends. Florence was born November 13, 1938, in Mt. Vernon, New York where she lived with her parents and sister, Grace, until her teenage years. Her family was relocated overseas in several different countries until she came back to the United States to attend Villanova University in 1958. She graduated in 1962 with a B.S. in nursing. She enlisted into the Navy in 1962 and was stationed at The U.S. Naval Hospital, Philadelphia, PA, where she met and married her husband of 55 years, Hubert in 1964. Soon after, they had two children and moved to Cherry Hill, New Jersey in 1967. Later they moved to Springfield, Virginia in 1973 and both lived there until their passing. Florence was a devoted wife, mother, and mentor to her hundreds of nursing students. She received her master’s degree in 1977 from Catholic University. She received her doctorate in Adult and Continuing Education in 1999 from Virginia Polytechnic University and State University. She was an instructor and Assistant Professor teaching at Marymount University, Northern Virginia Community and George Mason University from 1976 until 2016 when she retired from a wonderful 40-year career of teaching nursing. One of her favorite things to do was to cruise domestically and especially Internationally with her husband. She loved spending time at several beaches up and down the east coast which she found to be very relaxing. She and her husband would often jump in the car and travel to see family and friends for weekends. Visitation for friends and family will be held at Jefferson Funeral Chapel, in Alexandria, VA, Wednesday, June 16, 2021, at 5:00pm. A Mass of Catholic burial will be held at St. Raymonds of Penafort Roman Catholic Church on Thursday, June 17, 2021, at 11:00am. A graveside service will follow at Quantico National Cemetery, Thursday, June 17, 2021, at 1:00pm

Florence Irene Smoczynski of Springfield, VA, 82, passed away on Saturday, June 5, 2021 Florence was predeceased by her husband Hubert of 55 years. She is survived by her two children, Edward M. Smoczynski, Mary Ellen Torres her husband Michael... View Obituary & Service Information

The family of Florence Irene Smoczynski created this Life Tributes page to make it easy to share your memories.

Send flowers to the Smoczynski family.