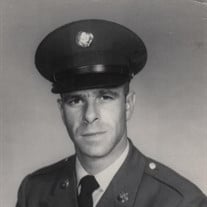 Sergeant First Class (SFC) Retired Everett Perry, age 86, died December 23, 2020 at Fairfax Rehabilitation and Nursing Center, Fairfax, Virginia due to complications from COVID-19. Mr. Perry is survived by his children Lisa Ann (nee Perry) O’Donnell (Jay) of Lorton, Virginia, John Perry (Suzanne) of Fall River, Massachusetts, Derek Perry (Dawn) of Savannah, Georgia: grandchildren Madden (nee O’Donnell) McGraw (Steven), John M. O’Donnell, Rayna Perry, Jayden Perry, Jamison Perry, and his brother, Robert Perry (Fall River, MA). He was preceded in death by his wife of 51 years Joan (nee Botelho) Perry, his father, Ernest R. Perry, mother, Mary (Travassos) Perry, and siblings, Ernest Perry, Edward Perry, and Loretta (nee Souza) all from Fall River, MA. Everett was born and raised in Fall River, MA along with his four siblings. He enlisted in the U.S. Army as an infantryman in 1951 and soon deployed to South Korea where he participated in combat operations. He was honorably discharged from the Army on October 2, 1954 at the rank of Sergeant. He returned to Fall River where he met and married his wife Joan on August 30, 1958. He later reenlisted in the Army on November 30, 1966. He deployed to Vietnam in October 1967 with the 192d Attack Helicopter Company as a Door Gunner. When the unit redeployed in October 1968, he assumed the critical duties of Platoon Sergeant. Upon returning to the United States, he was assigned to D Troop 6/1 Cavalry Regiment, 2d Armored Division at Ft. Hood, TX where he served as Platoon Sergeant. Everett volunteered to return to Vietnam in September 1969. During his second Vietnam Tour of Duty Everett served as Platoon Sergeant, Headquarters Company, 15th Transportation Detachment, 1st Cavalry Division; Helicopter Repairman and Platoon Sergeant, 255th Transportation Detachment, 1st Cavalry Division; and Maintenance Supervisor, 57th Aviation Company. After this tour he was reassigned to Ft. Rucker, AL and served as an instructor. His subsequent assignments took Everett and his family to Aberdeen Proving Ground, MD, Heidelberg, Germany, and Ft. McClellan, AL. Everett retired from the Army in 1983 after 20 years of dedicated service. His many awards include the Bronze Star with Valor, Air Medal, Army Commendation Medal, Good Conduct Medal and the Combat Infantryman’s Badge. Everett returned to his hometown of Fall River, MA and worked for many years before he and Joan retired to Peoria, AZ in 1997. He and Joan moved to Lorton, VA in 2009. Soon after Joan passed away after a valiant battle with bladder cancer. Everett lived with his daughter, Lisa and family in Lorton, VA for a few years before moving to a retirement community in Savannah, GA near his son, Derek and family. While there, Everett suffered a stroke and soon after was transferred to Fairfax Rehabilitation and Nursing Center, Fairfax, VA where he remained until his death. During the nearly four years he spent in Fairfax Rehabilitation and Nursing Center he was known as “Perry” and always had a smile for others. A Memorial Mass will be held at Nativity Catholic Church, Burke, VA on June 3, 2021, at 10 am and will be live streamed (Nativity Parish Burke on YouTube). A private interment for the family will be held directly afterwards at Arlington National Cemetery. In lieu of flowers please consider making a donation to a Veteran’s Organization of your choice in SFC (R) Everett Perry’s name, especially those that focus on PTSD or effects of Agent Orange.

The family of Everett Perry created this Life Tributes page to make it easy to share your memories.