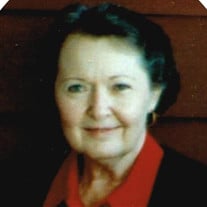 Evelyn (McClam) Hildebrand of Springfield, Virginia, formerly of Aurora, Colorado passed into eternity on September 22, 2019. Born in Lake City, South Carolina on July 2, 1939 to the late Levi and Lero (Lee) McClam, she was predeceased in 2014 by her devoted husband of 53 years, Colonel Leland Louis Hildebrand, USAF. Evelyn is survived by her two sons; Leland Louis (Jennet) of Centennial, Colorado and James Alan (Elizabeth) of Fairfax Station, Virginia; her eight grandchildren: Evelyn, James, Catherine, Claire, Veronica, Joseph, Rebecca and Michael, and her sister Mary Smith of Cades, South Carolina. Growing up in rural South Carolina with her nine siblings, hard work on the farm was the main fare of Evelyn’s childhood days. She met LT Lee Hildebrand, USAF while working on Shaw Air Force Base and became his loving wife on October 8th, 1960. Lee’s service brought his family to many different places in the United States as well as two tours in Germany. Evelyn skillfully transformed every new house into a loving home. When Major Lee Hildebrand was shot down over Vietnam on December 18th, 1971, Evelyn poured her energies into efforts to honor and bring POWs home. Their reunion in the spring of 1973 was celebrated by friends, family and a grateful nation. Evelyn’s patriotism led her to further volunteer work which culminated in many happy years serving in the White House. Her poise, graciousness and lovely disposition were welcomed and appreciated by all. Evelyn’s most recent years were increasingly affected by her struggles with Alzheimer’s Disease. That reality put her in the path of many remarkably caring people for whom she is eternally grateful. A Mass of Christian Burial will be offered at St. Raymond Catholic Church, 8750 Pohick Road, Springfield, Virginia 22153 on Saturday October 12, 2019 at 11 a.m. Burial at Arlington National Cemetery will take place at a later date.

Evelyn (McClam) Hildebrand of Springfield, Virginia, formerly of Aurora, Colorado passed into eternity on September 22, 2019. Born in Lake City, South Carolina on July 2, 1939 to the late Levi and Lero (Lee) McClam, she was predeceased in 2014... View Obituary & Service Information

The family of Evelyn Hildebrand created this Life Tributes page to make it easy to share your memories.

Send flowers to the Hildebrand family.