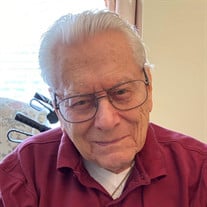 Eugene "Gene" Richard Swedo passed away peacefully on August 2, 2020, at the age of 101 in Northern Virginia. Born on February 22, 1919, to Andrew and Barbara (Piecuch) Swedo in Chicago, IL, Gene was devoted to his faith, his family, and his love of learning. Gene married his beautiful wife Jo-Lynn (Pagoria) in 1948, and together they raised their three children in Mt. Prospect, Illinois where they were members of Saint Raymond Catholic Church for 55 years. Gene enjoyed working. During the day he was an accountant with A.B. Dick Company, and in the evenings and on Saturdays he sold appliances at Carson Pirie Scott & Co, Landwehr, and finally retired from Novak and Parker Home Appliance when he was 91. When not working, his favorite Sunday pastimes were taking his children and grandchildren to museums, cultural events, country drives, and grocery shopping. Gene had an insatiable curiosity and was an advocate of lifelong learning. His passion for learning took hold while serving his country in World War II where Gene studied at some of the nation's finest universities as part of a special Russian Learning Program with the United States Army Air Forces. Under the GI Bill, he graduated from Northwestern University in 1955 with a degree in accounting. He continued to take courses at Harper College and Roosevelt University for the pure love of learning until his mid-90s. It was rare to find him without a book in hand, and often he could be found at the local library. His example inspired many to pursue their education. Gene transitioned from student to teacher in his 80’s when he began tutoring English as a second language. In 2013, at the age of 94, Gene was awarded the State of Illinois “Spotlight on Service” award for his volunteer service. A modest and unpretentious man, Gene was a devout Catholic who was extremely proud of his Polish heritage. In 1999, one of the highlights of his life was when he went to Krakow Poland to study for a semester and took a side trip to the Vatican in Rome to have an audience with Pope John Paul II. Gene was preceded in death by his father, Andrew, his mother Barbara, his wife Jo-Lynn, and his two brothers Leonard and Edwin. He is survived by his sons Jeffrey (Jill) Swedo of Newport Beach, CA; Gregory (Susan) Swedo of McLean, VA; his daughter Barbara Tookey (Chuck Snider) of Rougemont, NC; ten grandchildren (Jack, Christopher, Jenessa, Elizabeth, Emily, David, Katie, Michael, Ashlyn, Matthew); six great-grandchildren (Connor, Paul, William, Leo, Rose, and Genevieve); and many nieces and nephews. A Mass of Christian Burial will be held at Good Shepherd Catholic Church, 8710 Mount Vernon Hwy, Alexandria, VA on Thursday, August 13 at 11:30 am, followed by interment at Quantico National Cemetery, 18424 Joplin Rd, Triangle, VA at 2:00 pm. A special thank you to all the staff at Sunrise at Mt. Vernon and Capital Caring Adler Center for their excellent care and kindness. In lieu of flowers and in Gene's memory, please consider assisting someone with their educational goals or English skills.

Eugene "Gene" Richard Swedo passed away peacefully on August 2, 2020, at the age of 101 in Northern Virginia. Born on February 22, 1919, to Andrew and Barbara (Piecuch) Swedo in Chicago, IL, Gene was devoted to his faith, his family, and his... View Obituary & Service Information

The family of Eugene Richard Swedo created this Life Tributes page to make it easy to share your memories.

Send flowers to the Swedo family.