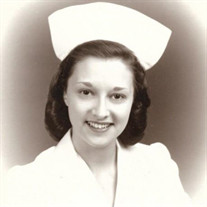 ELIZABETH ANN MORRISON, “BETTY,” (Age 94), passed away on Monday, April 27, 2020 at her home in Ashburn, VA. She waged a valiant battle against advancing age and declining health. She was a longtime resident of the Mount Vernon area of Fairfax County and an active member at Good Shepherd Catholic Church. She was born in Monaca, PA on February 9, 1926 and graduated from Monaca High School in 1944. She went to the Mercy Hospital School of Nursing in Pittsburgh, PA as a member of the Cadet Nurse Corps, a program initiated during WWII. She graduated in September 1947, became a Registered Nurse and worked at Mercy Hospital. She married James F. Morrison on September 6, 1948. Betty followed him for his job and eventually settled in Alexandria, VA in 1967. She resumed her nursing career at Alexandria Hospital in 1968 where she worked for 20+ years until she retired. During these years she fought and survived breast cancer. Betty lived for travel and always had a bag packed, ready to depart for the next adventure. She eventually saw much of the world—Asia, Iran, former Soviet Bloc countries, Egypt, Israel, Argentina and nearly all of Europe. But always, closest to her heart, was Ireland—anywhere in Ireland. She was a volunteer at George Washington’s Mount Vernon and loved zipping around in her 280Z, always on the go. She was predeceased by her husband, Jim; her parents Steven and Bertha Schupay; her brother Jack and sister Charlotte. Betty is survived by her brother, Steven J. Schupay of Beaver Falls, PA; sister Judy Measel of Hudson, Ohio; daughters Chris LaMarca of McLean, VA and Patrice Martin of Charlottesville, VA; her son James F. Morrison Jr. of Eager, AZ; and grandchildren Olivia, Shaune, Vanessa, Stephen and Donna. A Funeral Mass will be held at Good Shepherd Catholic Church, Friday, March 12, 2021 at 1 PM. Inurnment will be held at Arlington National Cemetery Monday, March 15, 2021.

ELIZABETH ANN MORRISON, &#8220;BETTY,&#8221; (Age 94), passed away on Monday, April 27, 2020 at her home in Ashburn, VA. She waged a valiant battle against advancing age and declining health. She was a longtime resident of the Mount Vernon area... View Obituary & Service Information

The family of Elizabeth Ann Morrison created this Life Tributes page to make it easy to share your memories.

Send flowers to the Morrison family.