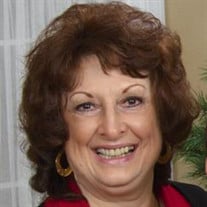 Doris Simonetti, age 78, died peacefully at home on July 19, 2021. Her family was there with her. She was sleeping and not responding to attempts to wake her, but her eyebrows raised slightly at the sound of her daughter Tara's voice a few minutes before she died. She was diagnosed with breast cancer in 2019. Unfortunately, despite attempted treatments, the breast cancer metastasized quickly and spread throughout her body. A heart blockage formed by the cancer eliminated the possibility of any successful surgery 3 months ago. When the doctors informed her of this situation, she bravely decided to stop all treatment and go on Hospice at home. She was a strong and loving woman, who had helped Sal, her husband of 55 years, through three open-heart surgeries, installation of a pacemaker and many other medical crises. She cared for her mother who had Multiple Sclerosis in the 1960's and was heartbroken when her daughter was diagnosed with the same. She nevertheless intended to be there to care for her daughter and family for as long as she could. She expressed no self-pity during her final months. Her only regret was not being able to continue to care for and be with her child and grandchildren. She was a proud New Yorker, though she had lived in Virginia for nearly two decades. She and Sal moved to Virginia from New York in 2003 when Tara, their only child, was expecting her first child. She earned a Regents diploma from John Adams high school in Queens, New York. She always wanted to become a nurse, however going to college was not possible for her. However she became the unofficial nurse of the family, often helping with her husband's and daughter's illnesses and answering questions about medications and treatment for her entire extended family and friends. In her career as an Administrative Assistant, she held positions in companies in New York, Rhode Island, and Virginia. She often worked in the medical field, (hospitals, nursing homes) as she was drawn to the field. She was thankfully able to retire several years ago. Doris was a dutiful daughter, a proud and loyal sister, the most loving and caring mother, and if you were lucky to be counted as her friend, then you know how awesome she was and how lucky you were. Doris was a singularly amazing woman, a loving wife, Mother, Grandmother, Sister, Aunt, and Friend. Our hearts are broken over our loss of her in our lives. She was always a foundational pillar of strength, competence and compassion that is terribly missed by all who knew her. She is survived by her only daughter Tara, her son-in-law Bill, her grandchildren Amelie and Tristan, and many inlaws and non-relatives who still regarded her as a sister and great friend.

Doris Simonetti, age 78, died peacefully at home on July 19, 2021. Her family was there with her. She was sleeping and not responding to attempts to wake her, but her eyebrows raised slightly at the sound of her daughter Tara's voice a few... View Obituary & Service Information

The family of Doris Elizabeth Simonetti created this Life Tributes page to make it easy to share your memories.

Send flowers to the Simonetti family.