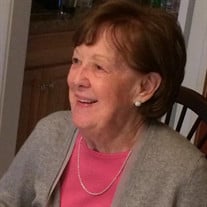 Doris McGurn Brown, 96, passed away on August 18, 2021 in her home in Springfield, Virginia where she had lived for almost fifty years, raising four daughters who cared for her until the end and already miss her more than words can say. Doris is survived by her daughters, Terry Brown (Patricia Briggs), Dorie Nealon (Tom), Lisa Brown (Keith), Judy McDonough (Jim) and their families, including fourteen grandchildren and three great-grandchildren. She is preceded in death by her husband James R. Brown and her nine siblings. She is the last of the McGurns who grew up on 92nd Street, Brooklyn, New York. Doris was born on the eve of the Great Depression in the Bay Ridge neighborhood of Brooklyn, New York where she learned that a strong faith in her savior Jesus Christ, and a sense of humor, are the keys to a happy life. She was a gifted storyteller, and her children and grandchildren never tired of hearing stories of her childhood. In the 1950s, a spirit of adventure led her to Alaska where she worked as a flight attendant on an airline that flew over the Aleutian Islands. In Alaska, she met another adventurer, James R. Brown of Eagle Lake, Maine. They married in 1958 and began a family. Their adventures together took them across the country (California, Connecticut) and around the world (Thailand), eventually settling in Virginia. Doris Brown was a dedicated homemaker who made a beautiful, loving home that she happily opened to friends, neighbors, and strangers so that they might be blessed. She was generous, kind, and compassionate, caring deeply for others in their suffering. She believed passionately in the power of prayer to bring about everyday miracles. No one who met her could forget her kindness and love. If she were writing this, she would make sure that everyone knew that she always gave God the glory. A viewing is scheduled for Sunday, August 22 from 2:00 PM to 5:00 PM at Jefferson Funeral Chapel, 5755 Castlewellan Drive, Alexandria, Virginia 22315. A graveside service is scheduled for Monday, August 23 at 2:00 PM at Quantico National Cemetery.

Doris McGurn Brown, 96, passed away on August 18, 2021 in her home in Springfield, Virginia where she had lived for almost fifty years, raising four daughters who cared for her until the end and already miss her more than words can say. Doris... View Obituary & Service Information

The family of Doris McGurn Brown created this Life Tributes page to make it easy to share your memories.