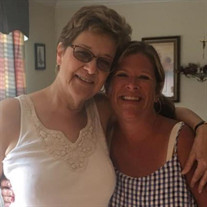 Diane A. Hurd, 69 of Falls Church VA and Willow Springs, NC; passed away after a courageous battle with Cancer and Dementia on Wednesday August 25, 2021. Diane was originally from Malverne, NY, a village in the town of Hempstead NY. Diane had a wonderful career that she cherished. She attended and graduated from State University of New York (SUNY) and received a degree in Entomology from University of Georgia. She represented Olympus Microscopes for over 20 years in the Northern Virginia, Maryland and DC area and was respected highly throughout the industry for her knowledge and skills. In 2011, she was top salesperson for Olympus US and was given a trip for 2 to NYC, all expenses paid and invited to the ‘Olympus Box’ to watch the US Open Tennis at Flushing Meadows NY. Although she worked hard, she also enjoyed her hobbies. Once she decided to take on a challenge or hobby, she went full out. She became a bike enthusiast in her early 50’s, riding the W&O Canal trail, over 30 miles, each way. In the 90’s with the onslaught of ancestry searches, she was able to research her family and compiled a full dossier. In doing so, she contacted her Italian family in Parma and in mid 2000’s visited them in their home in Northern Italy. She became fascinated with antique auctions and decided to have a business on the side, buying and selling antiques. During this time, she met several close friends in the auction and antique business. For fun and exercise Diane also took lessons and became an avid ice skater. Diane loved her pets. She had cats, JC in particular and later dogs, Baxter was her little walking buddy, with his beagle nose to the ground full time. Diane’s beloved sister, Carole Jean Hurd Polenz, her parents, Evelyn Rose Piscina Hurd and George Wilbur Hurd, and preceded her in death, she leaves behind her beloved niece, Cynthia Anne Polenz Mathews, nephew Stephen Gerald Polenz, and 3 grandnieces and nephews, Alexander Gerald Polenz, Colton Worth Matthews, and Amanda Carole Matthews all of NC, as well as several cousins, her longtime friends and companion of 40 plus years, Harold Hudson and numerous girlfriends she loved to go out to eat, shop and enjoy movies with. Diane will be missed sorely by so many across the country. Services will be planned for a later date when her ashes will be spread along with her sisters alongside their parents in Onancock, VA. In Lieu of flowers, donations can be made in her name to the American Cancer Society at https://www.cancer.org/

Diane A. Hurd, 69 of Falls Church VA and Willow Springs, NC; passed away after a courageous battle with Cancer and Dementia on Wednesday August 25, 2021. Diane was originally from Malverne, NY, a village in the town of Hempstead NY. Diane... View Obituary & Service Information

The family of Diane Adele Hurd created this Life Tributes page to make it easy to share your memories.

Send flowers to the Hurd family.