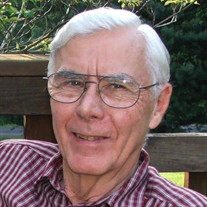 Derek Edward Cundill, age 88, of Springfield, Virginia passed away Friday, December 4 surrounded by his loving family. Derek was born in Cape Town, South Africa and was predeceased by his parents Harold and Helen Cundill of Durban, South Africa, and his younger siblings, sister Moyra and brother John. Derek graduated from Durban High School in 1950 and went on to study science and engineering at the University of Natal. In 1956, having won a scholarship, Derek moved to England to study at the Imperial College in London obtaining a Masters Degree in Chemical Engineering. Upon graduation, he spent his career with Mobil Corporation, as an engineer in various positions, including managing the oil refinery in Amsterdam, The Netherlands, and later as an executive at Mobil Headquarters in New York and Fairfax, Virginia, retiring in 1994. Derek was a committed Christian and active in the evangelical church throughout his life—in South Africa with a small evangelical church associated with the Christian Brethren where he supported youth activities and taught Sunday school, an Anglican Church in Amsterdam, the Evangelical Free Church in Wilton, Connecticut where he served as an elder, and Immanuel Bible Church in Springfield, Virginia where he remained an active member for 31 years serving on Elder Council, teaching ESL, working with the Treasure Chest, participating in the Financial Counseling ministry, and leading the Sunshine Adult Bible Fellowship. Derek was a lifetime learner, loved traveling, and enjoyed computers and all things Apple. “Oupa” most enjoyed his family, especially around meals where he couldn’t resist warm apple pie with vanilla ice cream. Derek is survived by his wife of 61 years, Rosemary Colleen (McMahon) Cundill, his son and daughter in-law Andrew and Amy Cundill of Pittsburgh, Pennsylvania, grandchildren Samantha Cundill, Clair Cundill Martin and husband Philip, great granddaughter Noelle, and daughter and son-in-law Deborah and Shannon Donovan of Fairfax, Virginia, grandchildren Ryan, Bryce and Sean. Interment will be at Fairfax Memorial Park, Fairfax, Virginia followed by a Celebration of Life at Immanuel Bible Church Thursday December 10. The family requests that in lieu of flowers, donations in Derek’s memory be made to Central Union Mission (www.missiondc.org).

The family of Derek Edward Cundill created this Life Tributes page to make it easy to share your memories.

Send flowers to the Cundill family.