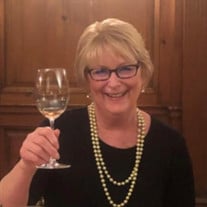 Deborah Sue Murray, age 63, passed away peacefully on February 13th, 2020 at her home in Alexandria, Virginia, surrounded by her family and enveloped in love. She was born May 14th, 1956, in Baltimore, Maryland to Lawrence and Barbara (James) Dohler, the middle sibling between David and Priscilla. A 1974 Graduate of Andover High school, she went on to get her Associate’s Degree from Catonsville Community College. Before returning to a professional career, Sue spent nearly 2 decades throwing herself into every volunteer position that needed her. Most dear to her heart were the years she spent on the FHYAA Board of Directors, the Chair of Waynewood Elementary PTA, and 3 years as the Chair of the West Potomac All Night Grad Party. She retired this past September, after nearly 15 years as the Executive Assistant for Jim May and then later, Nick Calio at Airlines For America. She was the consummate professional and organizational lifeblood while working there, and loved her coworkers and especially Jim and Nick, as dear friends. With her retirement, the board room at A4A has been dedicated in her name, a true testament to her role as the heart and soul of the organization. She married Raymond Young November 26, 1977. She later married Michael Murray on June 20th, 1981 and with it started her lifelong desire to be a mom, with Michael John (Felicia) and Heather Aileen. Two more children followed, with Timothy Matthew (Christine) and Elizabeth Ann (Carl). She was the beloved RaRa to 8 beautiful grandchildren; Grant Shine, Nicholas Andrew, Zachary Aaron, Brynleigh Grace, Delilah Elyse, Ella Mae, Everett Marie, and Greysen McLean. Sue had many passions in life: photography, travel, music, but by far her greatest passion was her family, and those friends lucky enough to be considered family, of which there were many. In lieu of flowers, donations can be made to The American Cancer Society P.O. Box 22478 Oklahoma City, OK 73123 donate3.cancer.org

Deborah Sue Murray, age 63, passed away peacefully on February 13th, 2020 at her home in Alexandria, Virginia, surrounded by her family and enveloped in love. She was born May 14th, 1956, in Baltimore, Maryland to Lawrence and Barbara (James)... View Obituary & Service Information

The family of Deborah Sue Murray created this Life Tributes page to make it easy to share your memories.

Send flowers to the Murray family.