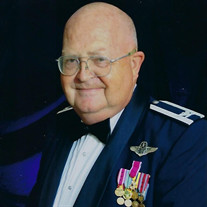 Col. David Lincoln Orme passed away December 17, 2021 at the age of 81. He was born February 15, 1940, in Preston, Idaho, the second child of Lincoln Arthur Orme and Florence Marie Skabelund. He grew up participating in scouting, the Future Farmers of America, and enjoying outdoor fun with his siblings. He graduated from Preston High School in 1954. He married Judith Kay Hull on August 31, 1960. They raised five children and later divorced. He was in the ROTC at Utah State University and graduated in 1961 as a 2nd Lieutenant with a Bachelor’s degree in History and Economics. In 1974, he earned a Master’s degree in Public Administration from Auburn University in Montgomery, Alabama. David devoted his life to service in the United States Air Force in numerous locations across the United States and around the world. He retired honorably, a highly decorated Colonel, in 1991 after over 30 years of service to his country, including the Vietnam War. He was a member of The Church of Jesus Christ of Latter-Day Saints and served in various church assignments throughout his life. He was an excellent scout leader for many years, a model train enthusiast, and an award-winning amateur photographer. On September 3, 1998, he married Cynthia Lange and they spent the next 23 years together. Survived by his wife, Cynthia; his children: Kelly (Denise), Teresa, Spencer (Laura), Brian (Jules), Melissa (Aaron); step-children: Marsha (Gregory), Daniel (Jeanne), Lindsay (Tracey), Laurel (John), Heidi (Kevin); 12 grandchildren; 13 step-grandchildren; 2 great-grandchildren; 7 step-great-grandchildren; siblings: Marie Gamble (Darrel), Jane Kennard (Richard), Kenneth (Laurie), Steven (Maxine), and many nieces, nephews and cousins. Preceded in death by his parents: Lincoln A. Orme, Florence Skabelund Orme; sister Beth Webster (Dennis), brother Glen (Sylvia), and sister-in-law Bonnie Orme. A viewing will be held Friday, January 7, 10:00 to 11:00am followed by funeral services at 11:00am at The Church of Jesus Christ of Latter-Day Saints, 6219 Villa Street, Alexandria, VA 22310. Burial will be at the Quantico National Cemetery on a later date. We request that those attending the viewing or funeral services please wear a mask. In lieu of flowers, please donate to the LDS Perpetual Education Fund or the Arnold Air Society Scholarship Fund.

Col. David Lincoln Orme passed away December 17, 2021 at the age of 81. He was born February 15, 1940, in Preston, Idaho, the second child of Lincoln Arthur Orme and Florence Marie Skabelund. He grew up participating in scouting, the Future... View Obituary & Service Information

The family of Col. David Lincoln Orme created this Life Tributes page to make it easy to share your memories.

Send flowers to the Orme family.