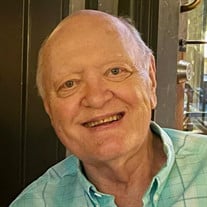 David V. Evans died on Friday, February 25, 2022, in Arlington, VA. A native of Arapahoe, NE, David was born on December 9, 1941 to Vernon and Mildred Evans. David was a well-known education policy leader in the DC community. He was best known for his work as Staff Director for the Senate Subcommittee on Education, Arts and Humanities, under Senator Claiborne Pell. For nearly two decades, David vigorously established Senator Pell’s leadership in advancing educational opportunities, evidenced in 1980 when the Basic Educational Opportunity Grant was renamed the Pell Grant. David’s work in the name of Senator Pell was widespread – in ensuring access to educational programs for the US Territories and Freely Associated States, to expanding civics education and work in the vocational areas. When Senator Pell retired in 1996, David became Legislative Associate for Higher Education of the U.S. House of Representatives Subcommittee on Postsecondary Education, Training and Lifelong Learning. In that capacity he worked directly for Congressman Dale E. Kildee, the subcommittee’s ranking minority member. David brought his knowledge, expertise, commitment, and passion to legislative and conference work until he retired from government service in 2000. Prior to his Federal work, David worked in state government in both his home state of Nebraska and in Rhode Island. In addition to his House responsibilities, David was a co-founder and member of the board of directors of Votivo Ltd., a candle manufacturing company with corporate headquarters in Seattle, Washington. He ended his professional career at the Center for Civic Education, where he was able to bring his love of travel and his commitment to good government to inform the quality programming created by the Center. David earned a bachelor’s degree from his beloved Grinnell College, where he was still active in both campus activities and with local DC area graduates. He also earned an MA in political science from The Eagleton Institute of Politics at Rutgers University. He received an honorary doctorate from Hastings College in 1998 when he was the commencement speaker. David divided his time between his homes in Arlington and near Mt. Jackson, VA. He had devoted friends across the area who loved getting into lively discussions at his Red Gap country home or at every Arlington Democratic function. He brought intelligence, interesting commentary, and humor to every encounter. His was indeed a life well-lived. David is survived by Georgie Evans of Hastings, sister-in-law; niece Michelle (Greg) Evans Howard of Rapid City SD; nephew Mike (Paula) Evans of Nokomis FL; nephew Jamey (Susan) Evans of Lakewood CO, seven great nieces and nephews, many cousins, many friends, and his dog Gaelic. He was preceded in death by his parents, Vernon and Mildred, and his brother, Dr. Charles Evans. A gathering of friends will be held on Thursday, April 7th, from noon to 2:00 at The Monocle Restaurant, 107 D Street NE, Washington, DC 20002.. Please view the obituary and sign the family guest book, sharing your memories of David at www.jeffersonfuneralchapel.com. Contributions in his name may be given to Shenandoah Animal Shelter, Salve Regina University (The Pell Center) or the Hastings College Evans Family Scholarship.

David V. Evans died on Friday, February 25, 2022, in Arlington, VA. A native of Arapahoe, NE, David was born on December 9, 1941 to Vernon and Mildred Evans. David was a well-known education policy leader in the DC community. He was best known... View Obituary & Service Information

The family of David V. Evans created this Life Tributes page to make it easy to share your memories.

Send flowers to the Evans family.