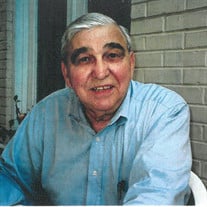 David Russell Cooper (88) of Alexandria, Virginia died of pneumonia on March 26, 2020 at INOVA Alexandria Hospital. He is survived by his wife of 36 years, Fay Menacker. His previous marriage to Aileen, mother of his children, ended in divorce. He was the loving father of Amy E. Cooper, and Mitchell E. Cooper (Ruth Conniff) He was preceded in death by his parents, Lillian and Leo Cooper. He is survived by his brother Bertram Cooper (Jean). His younger brother Alan (Judy) predeceased him. He is the cherished grandfather of 5: Lily C, Cooper (18), Max J.Weinstein (17), Ethan L. Weinstein (17), Rose C. Cooper (16) and Daphne C. Cooper (13). He is also survived by numerous friends and extended family. David was born to his parents on September 3, 1931 in Paterson, New Jersey He was the middle child of three sons. His parents had moved from the Boston urban area to a bucolic North Jersey farm community where opportunity awaited. His father sold food from an old Reo truck until he was able to open a store. Young David enjoyed life until his family moved to Paterson, where he received a Jewish education as well as lessons in antisemitism and a few black eyes. He also learned how to fight but life was better in Eastside High School (class of 1949), where he was voted Class Wit. He was then accepted at The Cooper Union (no relation, of course) a tuition-free scholarship school In New York City, where he studied architecture and city planning. Upon graduation in 1954, he was drafted and sent to Germany, where he served in the U.S. Army of Occupation (1954-1956 and is considered a Korean Veteran because the dates when he served). He was blessed with the ability to travel throughout Europe (concentration camps included). Upon separation from the service, he was accepted by both Harvard and Yale for graduate work. He chose to receive his Master’s Degree in City Planning from Harvard (1960), His family moved often, from Boston to Pittsburgh to Chicago to St. Paul (where he was Director of a large urban renewal project) and finally to Northern Virginia. David was Director of Planning and Development for the City of Alexandria, (1974-1979), held a long term contract with the City of Falls Church, and then consulted for banks and developers. He finished his career here, and retired, He loved to play tennis, go camping, do crossword puzzles and watch football. He was an avid follower of current events. In each city where he lived he was an active member of the synagogue and on the board and /or chairman of the social justice committee. A longtime resident of Alexandria Knolls West Condominium (20 years) he was a member of the Fitness Room Committee and for at least 5 years helped coordinate the weekly Happy Hour. For several years, he volunteered to deliver meals for Alive! in Alexandria For the past year, he was an active member of the Memoir Writers’ Group at the Pozez Jewish Community Center (JCC) of Northern Virginia, and was very pleased that three of his stories were included in in the group’s Fall 2019 publication. David was buried at Quantico National Military Cemetery on March 31st. An unveiling and memorial service celebrating his life will be held at a later date. In lieu of flowers, a donation in his memory may be made to: Pozez Jewish Copmmunity Center of Northern Virginia Memoir Writers’ Group 8900 Little River Turnpike Fairfax, VA 22031 https://mMeemberlink.jccnv.org/OnlineEdge/fundraising.html or Inova Alexandria Hospital - Center for Rehabilitative Care 4320 Seminary RdAlexandria, VA 22304 https://support.inova.org/page/3974/donate/1?_ga=2.57869865.2085658071.1586283311-1876480675.1586283311

David Russell Cooper (88) of Alexandria, Virginia died of pneumonia on March 26, 2020 at INOVA Alexandria Hospital. He is survived by his wife of 36 years, Fay Menacker. His previous marriage to Aileen, mother of his children, ended in divorce.... View Obituary & Service Information

The family of David Russell Cooper created this Life Tributes page to make it easy to share your memories.