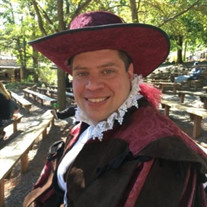 Daniel “Dan” Jason McCarthy, treasured husband, son, and brother, was born October 8, 1976, in Northern Virginia to Eunice “Kricket” and William “Bill” McCarthy. He spent his childhood in Montgomery County, Maryland. He received his undergraduate degree with honors from the University of Maryland in College Park, Maryland, and he went on to earn a Master’s Degree from Capitol College in Laurel, Maryland. He worked in various capacities for the U.S. federal government as an IT security specialist. After undergraduate college, he moved to Arlington, Virginia, where he lived the rest of his life. He met his wife Elizabeth there in 2005, and they were married in 2007. Known to some family and friends as “BigBird” and “Dthr33,” Daniel was an avid gamer, collector of comic books, and lover of medieval literature and dress. He enjoyed attending the Maryland and Pennsylvania Renaissance Festivals, sometimes in full dress, but always in full spirit. He also loved to travel, with Japan being his favorite destination. Daniel was the embodiment of a good human being: he made a positive impact on everyone and, to quote one of his oldest friends, he was a “goof and full of life.” Daniel took care of his family, he always helped his friends, and never asked for much for himself—except for the occasional comic book. He is survived by: his wife Elizabeth; mother Eunice; father William; stepmother MaryLynn; sister Amanda; brother-in-law Steve; aunt Marilyn; uncle Gary; numerous cousins, nieces, and nephews, two cats and a bird. He was preceded in death by his brother Beedge “BJ” McCarthy. In lieu of flowers, gifts in Daniel’s memory may be directed to support the: Johns Hopkins Comprehensive Brain Tumor Center via https://www.hopkinsmedicine.org/support/ Animal Welfare League of Arlington via https://www.awla.org/donate/

The family of Daniel Jason McCarthy created this Life Tributes page to make it easy to share your memories.

Send flowers to the McCarthy family.