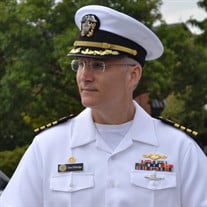 Retired Captain Daniel Everett Eldredge, United State Navy, of Alexandria, Virginia, passed away on Friday, July 10, 2020. He is survived by his loving parents; Robert and Kathleen Eldredge, beloved wife; Ginette Alomar Eldredge, cherished sister; Maureen Elizabeth Eldredge (Miles Brooks), and adoring brother; Michael James Eldredge (Wendy Blizard Eldredge). He also leaves many nieces, nephews and dear friends. Dan was born in Chelsea, MA at a Naval Hospital on July 28, 1962. Growing up as the son of a US Army Lt. Colonel, Dan lived in Alabama, Puerto Rico, and Germany until the family was stationed back in the US in his hometown of Ayer, MA. He graduated from Ayer High School in 1980. He was awarded an appointment to the United States Naval Academy, Class of ’84, in Annapolis, MD. After USNA commissioning week in 1984 he completed nuclear propulsion training and submarine training before reporting to the USS Casimir Pulaski, SSBN 633 (Blue). In May 1989 he left active duty to attend Tulane Law School in New Orleans, Louisiana. He graduated cum laude in 1992. In 1994 Dan graduated with honors from Naval Justice School and reported to Naval Legal Service Office, Northwest, Whidbey Island Detachment where he served as defense counsel and legal assistance officer. During his Naval career as a JAG (Judge Advocate General’s Corp) he completed tours in New Orleans, Norfolk, Puerto Rico, Washington State, Oregon (where he graduated cum laude from Lewis & Clark Law School in 2005 with an LL.M. in Environmental and Natural Resources Law), California, Hawai’i and DC at the Washington Navy Yard. After 27 years in the Navy he retired and became the Admiralty Counsel for the Navy’s Supervisor of Salvage and Diving since 2016. In that same year, he earned an M.A. in Defense and Strategic Studies from the Naval War College. In May, he and Ginette celebrated 18 wonderful years of marriage. Dan lived life to its fullest. He was an avid runner, cyclist, rower, chess player, voracious reader and overall sportsman. At the time of his passing, he lived in Alexandria with his wife and their golden retriever Niebla. He will be forever missed. In lieu of flowers, donations may be made to any of these charities close to Dan’s heart: American Cancer Society, Leukemia and Lymphoma Society, Mass General Fund, Naval Academy Alumni Association Greater Washington Chapter. A visitation was held at Jefferson Funeral Chapel, 5755 Castlewellan Dr. Alexandria, VA 22315, on Friday, July 17, 2020 from 2-4 & 6-8PM. A funeral service will be held at Arlington National Cemetery on Wednesday, February 2, 2021 at 9AM. To view the service remotely please see the following link https://www.youtube.com/watch?v=errNpdtwPrA

The family of Dan Eldredge created this Life Tributes page to make it easy to share your memories.

Send flowers to the Eldredge family.