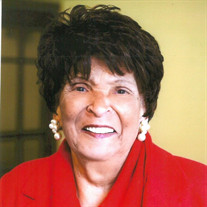 Clara O. Gipson (94) Passed away on Tuesday, November 23, 2021, of Alexandria, VA. Loving wife of the late Francis E. Gipson, Sr.; beloved mother of Francis Gipson, Jr., Linda Hitchens, Pamela Gipson, Constance Marston (Alan) and the late Teresa Gipson; grandmother of Romma Andrews (Michael); great-grandmother of Katerina, Raven and Kaelan-Michael. She will truly be missed by all who loved her.Her life’s work included volunteering with the schools and her churches and serving others. Funeral Service will be held at Grace Presbyterian Church, 7434 Bath Street, Springfield, VA 22150 on Saturday, December 4, 2021, at 12PM. Interment following National Memorial Park, Falls Church, VA at 2:30PM. Memorial contributions may be made in her honor to Grace Presbyterian Church. Celebration of Life Clara Orelean Gipson was born on October 30, 1927, in Crab Orchard, Kentucky, the sixth of eight children to Morris Graham Owsley and Margaret Jane Owsley. Clara was proud of being baptized in the Baptist Church before joining the Methodist Church as a young bride and serving faithfully in the Presbyterian Church for more than 60 years. After attending Kentucky State College, she married Francis Gipson, Sr. in 1947 in Richmond, Indiana, and began her married life in Huntington, West Virginia, where her first three children were born. After six years, the family relocated to Cleveland, Ohio for better professional and educational opportunities, where her last two children were born. She is the mother of five children, one son (Francis, Jr) and four daughters (Linda, Pamela, Teresa, and Constance); the grandmother of Romma; and the great grandmother of Katerina, Raven, and Kaelan-Michael. Her work with the public school system included serving as president of the elementary school PTA, publicity co-chairman and president of the junior high school PTA, the first African American and female president of Shaw High School PTA, and president of PTA Council. In addition, Clara volunteered with the Head Start Program in East Cleveland, the Edgar Nursing Home and the National Park Service wives (chairwoman) in Staten Island, and the Board of Elections for more than 20 years and Barcroft Nursing Home (chairwoman of Adopt-a-Resident Committee) in Northern Virginia. As a member of Werner Methodist Church, she taught Sunday School, organized a nursery, served as Circle leader and Bible lesson leader, and served as chairwoman of the Fellowship Committee. After moving to the city of East Cleveland in 1961, she joined the Phillips Avenue Presbyterian Church and was ordained as a deacon in 1970. She served as a member of the Evangelistic and Fellowship Committees. Following three years in Staten Island, New York, where Francis joined the Federal Government and the National Park Service, Clara and Francis settled in Springfield and joined Grace Presbyterian Church in 1978. It is widely believed that the Gipson family was the first African American family to make Grace their spiritual home. Since that time, her work has included serving as Circle leader for many years, volunteering at Echo House, volunteering in the church office for several years, volunteering with the women of Grace at Barcroft, handling the friendship register, co-chairing the Greeters Committee, calling the sick and the shut-in, and chairing the Leadership and Resource Committee. But these activities took up most of her time at Grace: making peanut butter and jelly sandwiches; serving for many, many years with the Sanctuary Guild arranging and delivering flowers from the worship services to ill and bereaved members (remember she loved flowers); and managing the Crop Table for more than 20 years, growing the annual collection of $500 a season to nearly $4000 by adding baked goods, jellies and honey, pickles, crafts, plants, and flowers to the more traditional offering of fruits and vegetables. She also served several terms as moderator for the Women of Grace and is now an honorary circle chairperson. In 2016 she received the Presbyterian Women – Honorary Life Membership Award. Upon her retirement from her volunteer programs and projects, she shared with the congregation, “You see, I have always known that GOD loves me—I just didn’t understand that YOU love me, too.” Clara was blessed to be a homemaker for most of her career but joined the staff at Shaw High School, from which all her children graduated, as they began to attend college. Clara’s famous Ice Box Rolls recipe (first baked in 1946) has been included in two different publications, Occasions to Savor (Delta Sigma Theta Sorority, Inc.) and American Legacy Woman magazine distributed in the Smithsonian Museum. Clara always believed that everyone she met was a potential new friend. She liked to share with them the church, her children, her hobbies, and the theatre. And everyone who knew Clara was familiar with her colorful coat hangers. It was her way of saying thank you to those she loved. Some of the best times she shared with friends included trips to the theatre, garden club, arranging flowers at church, and circle meetings. In her quiet times she enjoyed reading and refunding. Clara loved to travel and had countless opportunities to do so because Francis visited numerous National Parks such as Niagara Falls, the Grand Canyon, and the Alamo as part of his professional career. Her first cruise was to Alaska, but the place she enjoyed most was cruising through the Panama Canal. Clara will be greatly missed by her sister, sister-in-law, children, grandchild, great grandchildren, nieces and nephews, and a host of friends and congregants. If I Can Help Somebody by Alma B. Androzzo If I can help somebody, as I travel along If I can cheer somebody, with a word or song If I can show somebody, from doing wrong Then my living shall not be in vain! No, my living shall not be in vain. No, my living shall not be in vain! If I can help somebody, as I pass along, Then my living shall not be in vain! If I can do my duty as a Christian oft, If I can bring back beauty to a world up wrought, If I can spread love’s message that the Master taught, Then my living shall not be in vain!

The family of Clara O. Gipson created this Life Tributes page to make it easy to share your memories.