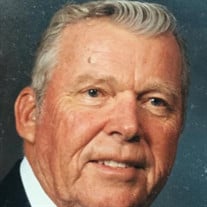 Chester Swanson (Chigger) Chinn passed away peacefully on Friday, December 18, 2020 at the Blue Ridge Christian Home in Bealeton, Virginia. Chigger was born in Alexandria, VA on August 7, 1932. He was preceded in death by his beloved Wife, Virginia Lee (Ginger) Carr, his parents Samuel S. Chinn and Edith C. Beahm Chinn, brother Marvin Chinn, his four sisters, Virginia Campbell, June Thomas, Judy Carter, and Phyllis Holloway. He is survived by his three children, James M. Chinn (Suzanne), Chester Michael Chinn (Felecia), Teresa D. Melville (Chuck), his 11 grandchildren and 19 great grandchildren and 1 one the way. In 1948, Chigger joined the Penn Daw Fire Department at the young age of 16. He enlisted in the Marine Corps in 1952 where he served as a firefighter at Parris Island. After being discharged in 1954, he was hired by the Ft. Belvoir Fire Department and shortly thereafter by the Alexandria Fire Department where he worked at Station 4, until he resigned to take a job with Fairfax County Fire Service. He was hired as the second Custodian (firefighter) in 1955 as the 29th paid firefighter in Fairfax County assigned to Station 11. He rose through the ranks and in 1971, he was promoted as one of the first three Zone Administrator’s (later to be renamed Battalion Chief). He was originally assigned to the 1st Battalion and shortly after that back to his home on the Highway (Rt1), often referred to as Chinn’s Dominion. He retired from the Fire Department in December 1983. After retirement, Chigger did a short stint driving Handicap school buses for Fairfax County, and then worked as a seasonal Inspector for the Fire Marshal’s Office conducting system testing on fire alarms and fire suppression systems. Chigger and his wife Ginger retired to their farm in Berkeley Springs, West Virginia where he enjoyed spending time with his family, refurbishing old ford tractors and raising black angus cattle. The family has requested that contributions, in memory of retired Battalion Chief Chester Chinn, be made to the Retirement Association, Box 2301, Fairfax, Va. 22031. Please contact the family for funeral service information. The service will be livestreamed.

Chester Swanson (Chigger) Chinn passed away peacefully on Friday, December 18, 2020 at the Blue Ridge Christian Home in Bealeton, Virginia. Chigger was born in Alexandria, VA on August 7, 1932. He was preceded in death by his beloved Wife, Virginia... View Obituary & Service Information

The family of Chester Swanson Chinn created this Life Tributes page to make it easy to share your memories.

Send flowers to the Chinn family.