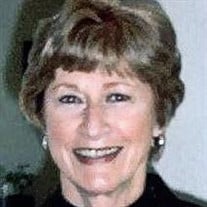 CARROLL S. HOWELLS of Baltimore, Maryland, daughter of Frank M. Shaw and Genevieve F. Jeffries Shaw, passed away peacefully Sunday night, December 15, 2019. She was 84. In 1955, she married Richard I. Susco, and is survived by their two daughters, Dr. Christina Susco Jensema, and Carroll Ann Susco. She remarried in 1978, Henry C. Howells, III. The two moved to Mason Neck, VA, where they enjoyed many wonderful times on the Potomac River. Carroll had many pursuits there to include The Hallowing Point Garden Club, The Women’s Committee of the National Symphony, as well as traveling and skiing. She also enjoyed a 30-year career in real estate working at Ruth Robbins, where she and Hank met, and later Springfield Realty and Weichert Realty. She was preceded in death by her mother and father, Frank and Genevieve Shaw, a brother Lt. John R. Owens, Richard I. Susco, Henry C. Howells, III, as well as her stepdaughter Margaret Howells Owens. She is survived by four stepchildren, Henry Howells, IV, Dr. Katherine Howells, Julie Howells Avelon, and William Howells, as well as grandchildren Brad and Andrew and step-grandchildren Heather, Chase, Arden, William, John, Claire, Anna, Michelle, Emma, Sam and five great-grandchildren Ava, Mason, Henry, Hannah, and John. A memorial service will be held at the Jefferson Funeral Chapel at 5755 Castwellian Drive, Alexandria, Virginia, 22315, on Saturday February 1, 2020, at 1:00 p.m., with a reception to follow. The interment will be held at Arlington National Cemetery in the summer of 2020. Donations to charities are welcomed to include The American Cancer Society, Doctors without Borders, The National Alliance of the Mentally Ill, and the American Society for the Prevention of Cruelty to Animals.

CARROLL S. HOWELLS of Baltimore, Maryland, daughter of Frank M. Shaw and Genevieve F. Jeffries Shaw, passed away peacefully Sunday night, December 15, 2019. She was 84. In 1955, she married Richard I. Susco, and is survived by their two daughters,... View Obituary & Service Information

The family of Carroll S. Howells created this Life Tributes page to make it easy to share your memories.

Send flowers to the Howells family.