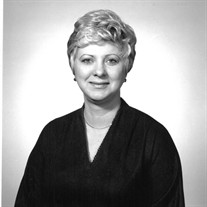 A loving wife and mother passed away on December 28, 2021, at Walter Reed National Military Medical Center. After a serious fall and surgery, she never recovered to return to her home at The Fairfax Retirement Community in Fort Belvoir, Virginia. Carole was born on March 22, 1939, in East St. Louis, Illinois to Robert Valentine and Blanche McMahon. After marrying her husband, Paul Jackson “Jack” Rice in 1959, she devoted the next three years working as a legal stenographer putting her husband through law school. During her 28 years as an Army wife, she perfected working with ceramics and along with collecting cookbooks, she organized, typed and published cookbooks representing assignments at Fort Riley, Kansas, The JAG School in Charlottesville, Virginia, and The Army Officers’ Wives’ Club of the Greater Washington Area. Her amazing Christmas parties, where she prepared all the dishes, were known far and wide. Carole is survived by her devoted and loving husband of 62 years, Jack; her daughters, Rebecca Ross of Prescott Valley, Arizona and Missy Hansen (Terry) of Middleburg, Florida; her son, Paul Jackson Rice, Jr. (Sandy) of Palmyra, Virginia; six grandchildren and two great-grandchildren and her brother, Will Shaw of St. Louis, Missouri. Carole was preceded in death by her parents and her brother, Bobby Valentine (Sue) of St. Louis, Missouri. A celebration of life will be held at The Fairfax at Belvoir Woods, 9140 Belvoir Woods Parkway, Fort Belvoir, Virginia 22060 on Saturday, February 26, 2022 @ 11AM held in the auditorium, followed by a reception in the dining room. interment at Arlington National Cemetery will be held on a later date. In lieu of flowers, contributions in Carole's memory may be made to: Army Retirement Residence Foundation-Potomac.at http://afrrsc.com/donate.html

A loving wife and mother passed away on December 28, 2021, at Walter Reed National Military Medical Center. After a serious fall and surgery, she never recovered to return to her home at The Fairfax Retirement Community in Fort Belvoir, Virginia.... View Obituary & Service Information

The family of Carole Jeanne Rice created this Life Tributes page to make it easy to share your memories.

Send flowers to the Rice family.