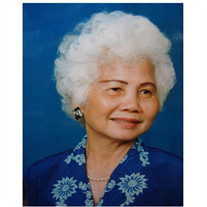 With a heavy heart, we announce the passing of Bon Thi Nguyen on July 13, 2021, in Saigon, Vietnam. She passed away peacefully in her sleep and was 93 years old. Bon was born on December 20, 1927 to Ngo Le and Song Thi Truong in Quang Nam Province, Vietnam. She is the eighth child, the fourth of six daughters, in her family of twelve: Ngo, So, Ty, Phung, Thanh, Hoa, Chieu, Bong (Bon), Trang, Mai, Cuc, and Quy. Bon was born to a poor family who lived on a boat, buying and selling food along the river while her father practiced as a spiritual shaman. One of her older brothers was drawn to sermons by American missionaries and eventually converted to Christianity. This angered their father, and he challenged his son’s new-found beliefs by tying him to a boat for three days. He told him that if prayers to his god would keep him alive, then he, too, would believe in his god. Her brother survived unscathed, and she and her family soon became devout Christians. Witnessing this event left an everlasting impression on Bon and a memory she held very dear to her faith. When she was a young teenager, she and her family moved to Da Lat where she earned a living by selling vegetables to Japanese soldiers. Some of Bon’s siblings were able to find work in Saigon and moved south, working as carpenters and cooks. One of her sisters worked for a French family and helped Bon get a similar job even though she couldn’t speak French. Around the same time, a Northerner named Sao Van Nguyen also moved to Saigon. He had a small shop where he tailored clothes for Senegalese soldiers and happened to be neighbors with Bon. Sao was drawn to her beauty and joyful, fighting spirit. The two began to date and through their conversations, Sao learned that Bon had strong religious convictions. When he proposed, she only agreed to marry him if he converted from Buddhism to Christianity. She told him that she wanted to be married in a church wearing a white ao dai (traditional Vietnamese dress). They made their wedding vows in Saigon in 1948 and were blessed with 12 children: Yen, Ngoc, Lynn, Robert, Hung, Minh, Tom, Laura, Kimberly, Luke, Mark, and Julia. In April 1975, during the Fall of Saigon, Bon and Sao were forced to make an agonizing decision of whether to keep the family together in Saigon in hopes of surviving the war, or to leave Vietnam and save as many of their children as possible. One son, Ngoc, was imprisoned while another, Hung, was disabled with polio and could not be quickly and safely transported out. This decision weighed tremendously heavy on her heart as a mother, but they had to take the risk and flee. Two of the older sons, Bob and Minh, were sent ahead while the remaining 8 children stayed by their parents’ side as they made their escape. Bon prayed for their survival and never lost faith that she would find her sons again. Bon and the family arrived at a refugee camp in Indiantown Gap, PA in June 1975. Two-by-two, the children left with sponsored families for Northern Virginia. Bon and Sao were now all alone in a new country and separated from all of their children. After months apart, the Prince of Peace Church found a house in Alexandria, VA where the family reunited. Before long they were able to create their own home in Springfield, VA, and in 1990, they reconnected with their two sons who were left behind in Vietnam. Bon had the ability to make anyone feel cared for, as if they were her own child. She will forever be remembered for her warmth, resilience, selflessness, and her unconditional dedication to God and her family. Paired with wit and a smile that could light up a room, Bon radiated elegance and beauty. Her strength – physical, spiritual and psychological– was undeniable. Our matriarch, the true embodiment of what it means to be a mother, will be so greatly missed. Bon was predeceased by Sao Nguyen (husband), Hung Nguyen (son), Ngo (brother), So (brother), Ty (sister), Phung (sister), Thanh (brother), Hoa (sister), Chieu (brother), Trang (sister), and Cuc (brother). She is survived by Yen Miller (daughter), Mike Miller (son-in-law), Andrew Miller (grandson), Thuy Miller (granddaughter-in-law), Jonah Miller (great grandson), Clara Miller (great granddaughter), Ngoc Nguyen (son), Phuong Khanh Nguyen (daughter-in-law), Han Nguyen (granddaughter), Donald Nguyen (great grandson), Mia Ahern (great granddaughter), Tina Nguyen (granddaughter), Lynn Nguyen (daughter), Linda Ha (granddaughter), Daniel Douek (grandson-in-law), Lisa Ha (granddaughter), Timothy Smith (grandson-in-law), Larkin Ha-Smith (great grandson), Vinh Ha-Smith (great grandson), Brian Ha (grandson), Robert Nguyen (son), Chau Nguyen (daughter-in-law), Robert Nguyen, Jr. (grandson), Lynna Nguyen (granddaughter), Scott Nguyen (grandson), Michael Nguyen (step grandson), Michelle Nguyen (step granddaughter), Minh Nguyen (son), Tatyana Nguyen (daughter-in-law), Natashia Nguyen (granddaughter), Rizal Dumadag (grandson-in-law), Cameron Dumadag (great step granddaughter), Thomas Nguyen (son), Janeth Nguyen (daughter-in-law), JannieLe Nguyen (granddaughter), Laura Harris (daughter), Andrew Harris (son-in-law), Amanda Wotring (granddaughter), Meghan Harris (granddaughter), Conor Harris (grandson), Kimberly Nguyen (daughter), Warren Weiss (son-in-law), Christina Thompson (granddaughter), Jonathan Schwam (grandson-in-law), Luke Nguyen (son), Stephanie Nguyen (daughter-in-law), Evelyn Nguyen (granddaughter), Jadyn Nguyen (granddaughter), Mark Nguyen (son), Julia Wolf (daughter), Christian Wolf (son-in-law), Austin Wolf (grandson), Kirsten Wolf (granddaughter), Mai (sister), and Quy (brother). There will be a service in honor of Bon at Jefferson Funeral Chapel, 5755 Castlewellan Dr., Alexandria, VA 22315 at 11:00am July 22, 2021. Due to COVID requirements, we have limited seating available. Please contact a family member if you would like to attend the funeral service or closed casket visitations/viewings so we can comply with the headcount restrictions. Thank you for your understanding.

With a heavy heart, we announce the passing of Bon Thi Nguyen on July 13, 2021, in Saigon, Vietnam. She passed away peacefully in her sleep and was 93 years old. Bon was born on December 20, 1927 to Ngo Le and Song Thi Truong in Quang Nam... View Obituary & Service Information

The family of Bon Thi Nguyen created this Life Tributes page to make it easy to share your memories.

With a heavy heart, we announce the passing of Bon Thi Nguyen...