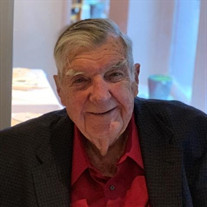 On 3 December 2021 Billy Eugene Rutherford of Springfield, Va., age 90, died peacefully at Fairfax Hospital of age-related causes. He is survived by his devoted wife of 68 years, Joyce Rutherford and five adult children: Mark (Denise) Rutherford of San Clemente, Ca., William ‘Ron’ Rutherford of Fairfax, Va., Carol Carlisle (Rob Lassiter) of Springfield, Va., Eric (Rochelle ‘Sissy’) Rutherford of Lynch, Ky., and Kirk (Marta) Rutherford of Springfield, Va. He also has nine loving grandchildren and nine great grandchildren, as well as nieces and nephews. Billy was preceded in death by his parents Emma and William Rutherford, and sister Shirley Hoffman and brother H.C. ‘Bud’ (Mary) Rutherford, all hailing from Fayetteville, N.C. Billy was a decorated veteran who served the United States honorably for 29 years, including combat tours in both the Korean and Vietnam Wars. He joined the Air Force at age 17. After two years in the Air Force, he transferred to the Army to attend Officer Candidate School and Jump School at Fort Benning, GA. From there he served in the Korean War as an infantry platoon leader and soon after commanded a company as a second lieutenant. He completed flight school in 1956 and was ultimately rated as a pilot in single and multi-engine helicopters and airplanes, and as an Instrument Flight Examiner. Billy commanded platoons, companies, battalions, and brigades. He retired at the rank of Colonel from the U. S. Army in 1979. He enjoyed his career and time after leaving the Army. He often credited Joyce with doing a great job and contributing to any success he had by managing their home and five children even as he served two tours in Vietnam. While in the Army Billy also earned his M.A. in Adult Education, which he applied to a second career in Training and Development. He worked as a corporate executive in the private sector aiding in the development of numerous, significant training systems and programs; and, until his passing, as the founder and President of American Integrated Training Systems, Inc. where he led and mentored several instructors working with private, local, and national emergency service and military agencies worldwide training others to deliver the Emergency Vehicle Operators Course he helped develop. Billy had a passion for teaching and encouraging safety and readiness. He loved riding motorcycles, flying airplanes, and playing golf for as long as he was able. He will be remembered for sharing his time and possessions, vacations, and his advice with others until the end. Billy’s children would like to acknowledge and extend their sincere appreciation for the special care and attention he and Joyce have both received from their compassionate friends and neighbors. Jefferson Funeral Chapel in Alexandria will host a memorial service at 10 a.m. on Friday, December 10, 2021. There will be an interment service for both Billy and Joyce together at Arlington National Cemetery at a future date.

The family of Billy E. Rutherford created this Life Tributes page to make it easy to share your memories.

Send flowers to the Rutherford family.