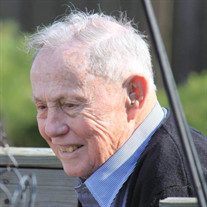 Bill Warren Bodager, age 96, formerly of Rittman, Ohio, passed away peacefully among family on 20 September, 2021, at his home, in Northern Virginia. Bill was born on 1 September, 1925 in Rittman, Ohio, the first of four sons of Minnie (Hubacher) and Warren Bodager. Bill graduated from Rittman High School in 1943, enlisted in the Marine Corps, and then attended the Naval Academy, graduating in 1949. Upon graduation, Bill accepted a commission into the U.S. Air Force. As a lieutenant he entered flight training, later graduating from electronic warfare training at Ellington Air Force Base, near Houston Texas. While in Houston, he met the love of his life, Doris Wells, whom he married in 1952. Bill’s thirty year Air Force career included assignments in the Strategic Air Command (SAC), which was charged with the U.S. strategic nuclear strike mission. He was assigned to a B-36 heavy bomb wing, to the Minuteman and Titan strategic missile wing and to SAC Headquarters. He also worked with industry on the Minute Man Intercontinental Ballistic Missile (ICBM) Test Program. As a Colonel he worked on the U.S. Air Force Staff, oversaw B-52 Bomber Aircraft Maintenance and spent a year in Southeast Asia. He worked with the Joint Chiefs of Staff and his final assignment was the Deputy Commander of the Defense Personnel Support Center in Philadelphia. During his military career Bill graduated from law school, University of San Francisco, obtained a master’s degree in history, University of Omaha, a master’s degree in International Relations, American University and he attended the National War College. Upon his retirement he obtained a post graduate degree in Taxation Law, Villanova University. He opened his law practice in Media, PA where he practiced law for 30 years. Bill was an avid tennis player for most of his life. He had a tremendous sense of humor, genuinely enjoyed life, loved his family, and had many friends. He spent his last years living in Northern Virginia close to family. Bill is preceded in death by his wife Doris Bodager, brothers Boyde Bodager and Benjamin Bodager and leaves behind his brother Robert Bodager, two daughters, Barbara Bodager (Henry Evans) and Pamela Bodager (Carlton Jenkins), four grand-children; Christopher Jenkins, Aileen Evans, Jessica Hartsock and Elizabeth Evans and two great grandchildren. Bill will be laid to rest, alongside his wife Doris, at the Naval Academy Columbarium at a private family celebration in the spring of 2022.

Bill Warren Bodager, age 96, formerly of Rittman, Ohio, passed away peacefully among family on 20 September, 2021, at his home, in Northern Virginia. Bill was born on 1 September, 1925 in Rittman, Ohio, the first of four sons of Minnie (Hubacher)... View Obituary & Service Information

The family of Bill Warren Bodager created this Life Tributes page to make it easy to share your memories.

Send flowers to the Bodager family.