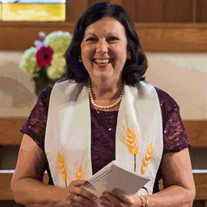 The Rev. Beverly Kay Hill Weatherly 1950-2021 After a year long battle with MDS and leukemia, the Rev. Beverly K. Weatherly passed into Eternal Glory on Friday, May 28th held by her children and grandchildren. Beverly was born in Indiana, Pa., and raised outside Columbus, Ohio. She graduated from Ohio State University and went to work for the Governor of Ohio. She moved to New York City and worked at Nestle and Shell corporations before attending Princeton Theological Seminary and General Seminary. She met John working at a neighborhood Vacation Bible School in Trenton, N.J. Beverly and John were married in April, 1986 and she was ordained into the Priesthood of the Episcopal Church one month before the birth of their first daughter Kathryn Brooks. John and Beverly served as Appointed Missionaries of the Episcopal Church in Brasilia, Brazil, where their son Andrew was born. Returning to the United States in 1989, Beverly worked in Wilmington, N.C., where their daughter Maegan was born. Beverly served parishes in Darien and New Canaan, Ct., Alexandria and Arlington, Va., and was Rector of St. Andrew’s Episcopal Church in California, Md. , for 12 years. After 9/11 Beverly managed her home and children during two long combat deployments by her husband John, a Chaplain in the U.S. Army. She has been the Moderator for the Randolph, New Hampshire church where she has vacationed since 1984. She is survived by her husband, John, children Kathryn, Andrew, and Maegan, sons-in-law Nathan Danials and Brian Scowcroft, and grandchildren Kaeden, Madison, Jameson, Easton, Christian, Monroe and Conor. A Celebration of her life and ministry will take place Sunday, June 6th at 2:00 at St. Andrew’s Episcopal Church, California, Md. with the Bishop of Washington. In thanksgiving for her life, her family asks that she be remembered by donations to children’s ministries, St. Andrew’s Episcopal Church, 44078 St. Andrew’s Church Rd., California, MD 20619

The Rev. Beverly Kay Hill Weatherly 1950-2021 After a year long battle with MDS and leukemia, the Rev. Beverly K. Weatherly passed into Eternal Glory on Friday, May 28th held by her children and grandchildren. Beverly was born in Indiana,... View Obituary & Service Information

The family of Beverly Kay Hill Weatherly created this Life Tributes page to make it easy to share your memories.

After a year long...

Send flowers to the Weatherly family.