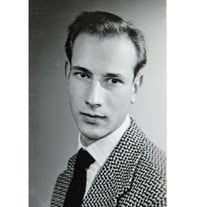 Benno Freiderich Amrein, of Alexandria, VA passed away peacefully at home on January 6, 2022. He was born on August 23, 1936 in Zurich, Switzerland and lived there through early adulthood. He married his wife, Miriam Catherine Amrein on June 16, 1962 in Bournemouth, England. Together they had one son, Robert Amrein on September 2, 1974. Benno joined the Swiss Army to complete his compulsory duty during his early twenties, and spoke often about his time there; much of it spent in the mountains. Soon after leaving the military he completed cosmetology school, and went on to attend school at L’Oreal in Paris where he started his career as a hair stylist that lasted more than 60 years. In 1959 he embarked on a 4 month cruise around the world as a hair dresser on the ship. He then went on to work in Bournemouth, England where he met his future wife Miriam. After living in England for several years Benno and Miriam were looking for a change and decided to give America a try. They applied for and received their green cards, said goodbye to friends and family, and moved to the States in 1965. While initially only planning to stay for a year, they liked it so much they decided to make the move permanent. Immediately after arriving they met Teresa and Vincent Galiffa who ended up being life-long friends and became their family in America; spending many holidays, vacations, and happy times together over the years. They also became business partners and started a successful Hair Salon/Boutique called Vincent and Vincent/La Boutique. They opened up a location in Beacon Mall in Alexandria, VA where they worked for more than 35 years. After retiring the business he worked at Twisters in Old Town and La Petite in Bell View. After being in America for many years Benno decided it was time to officially become an American citizen. On July 24, 2003 Benno was sworn in as a US Citizen. While he was always very proud of his Swiss heritage he was also very proud to become an American citizen as well. Benno loved sports especially watching the Washington Capitals, Washington Football Team/Redskins, and Switzerland’s soccer team. He also loved to watch his grandchildren play their various sports and enjoyed coming to see them as much as possible. While he wasn’t able to see many in person over the last few years, he was sure to watch online anytime a game was being streamed. Benno is survived by his wife of 59 years Miriam; his son Robert and his wife Buffie; and two Grandchildren Kurt (17) and Gillian (15). His family will hold a celebration of Benno’s life at a later date.

Benno Freiderich Amrein, of Alexandria, VA passed away peacefully at home on January 6, 2022. He was born on August 23, 1936 in Zurich, Switzerland and lived there through early adulthood. He married his wife, Miriam Catherine Amrein on June... View Obituary & Service Information

The family of Benno Amrein created this Life Tributes page to make it easy to share your memories.

Send flowers to the Amrein family.