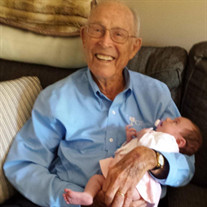 Passed away Friday, January 29, 2021 in Springfield, Virginia. He is survived by his wife Martha Cockfield; children, Julie Seay (Kevin), Jennifer Le-Ann Pyles (Jerry) and Ben A. Cockfield (Debbie); grandchildren, Emily Seay Smith (Dan), Bryan A. Cockfield (Jessica), Ellen Seay, Erin Cockfield, Kate Seay, and Alex Chestnut and great-grandchildren, Amelia Smith and Calvin Smith. Born and raised in Pamplico and Florence, SC, Mr. Cockfield attended The Citadel for one year prior to entering the Army during WWII. After the war, he re-entered The Citadel and graduated with a degree in Business Administration in 1949. He was recalled into the Army during the Korean War. Afterwards, he began a career with the U.S. Department of Agriculture which culminated in his retirement from the position of Deputy Director of Budget and Finance for the Agricultural Marketing Service after over 30 years of service. He worked for private industry and the State of Virginia for several years before leaving the work life behind. Mr. Cockfield enjoyed playing golf, gardening, and spending time with his family. He was pre- deceased by his sisters, Louise DuBoise, Grace Knowlton, Ethel, Stokes, Jessie Habib, and his brothers, Charles DeLeon, and Richard. A graveside service will be held at Quantico National Cemetery Friday, February 5, 2021 at 12:30 PM. In lieu of flowers memorial contributions may be made to St. Mark’s Lutheran Church.

The family of Bennie Tillman Cockfield created this Life Tributes page to make it easy to share your memories.

Send flowers to the Cockfield family.