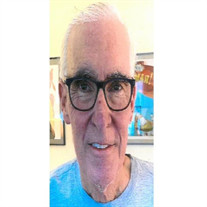 Barry Evan Weinstein Of Alexandria, VA, passed away peacefully at home on May 6, 2022. Beloved partner, friend, educator and advocate, Barry was born on September 11, 1956, in Newport News, VA, to Juanita Julia (nee Taylor) and Jerald Weinstein. He grew up in Newport News and graduated from Homer L. Ferguson High School in 1974. On a gap year before college, he worked in Israel on a kibbutz and then attended the College of William and Mary where he earned his B.A. in fine arts in 1979. He then earned a Master’s degree in education from the University of South Carolina. A gifted artist himself, he taught art in Columbia, SC, where he was voted by his school as teacher of the year. After that he taught for decades in Fairfax County Public Schools, VA, and held a number of leadership positions, including curriculum writer and assistant principal. During his career, he spent a year on a Fulbright Fellowship teaching in Prince Edward Island, Canada. When he retired, he became a lobbyist for the Fairfax County Federation of Teachers and advocated for K-12 public education legislation. He was appointed by the Virginia Secretary of Education to the School Readiness Committee that was created by the Virginia General Assembly. He is survived by his devoted partner, Thomas Martin, and a sister, Judith Weinstein. Barry is remembered as kind and generous with many talents, including producing paintings that grace the walls of honored friends and inspiring children to learn and create. Services will be private. In lieu of flowers, memorial donations may be made to Inova Schar Cancer Institute, c/o Inova Health Foundation, 8110 Gatehouse Road, Suite 200 East, Falls Church, VA 22042; phone 703-289-2072; or online inova.gives/ISCI .

The family of Barry Evan Weinstein created this Life Tributes page to make it easy to share your memories.