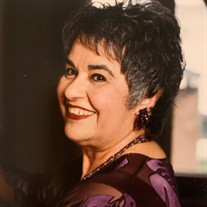 Barbara Marie Taylor, 89, of Alexandria, Virginia, passed away peacefully on Saturday, August 14, 2021 at the Goodwin House after a long illness. She was born in Lawrence, Massachusetts on February 14, 1932 and was the daughter of hardworking Syrian immigrants, the late Madeline Elbeery and Farris Marad. They instilled great pride in their Middle Eastern heritage that carried on throughout her life. She was predeceased by sisters, Grace and Marion; and brothers, Henry and George (Corinne). Barbara was a 1950 graduate of Lawrence High School. Upon graduation, she continued her education at the Chamberlayne School of Design in Newton, MA. Barbara had a knack for fashion and design and was proud to share she was employed at Jordan Marsh Department Store (Boston) and Macy’s in New York City following graduation. On October 17, 1953, she married Richard “Dick” T. Taylor, Jr., who passed away in 2003. After moving to various cities from Boston, MA, Metuchen, NJ; Memphis, TN to Greenville, MS for Dick’s career with the FBI, they settled in Alexandria, VA in 1959 to be close to the D.C. headquarters. Barbara and Dick raised their family there and are survived by their children: Richard (Ann) of Decatur, GA; Henry (Theresa), of Framingham, MA; Paul (Pim), of Shepherdstown, WV; Robert (Joyce) of Colonial Heights, VA; Marion (Neal) of Woodbridge, VA; and Grace (Martin) of Alexandria, VA; and grandchildren, Nicholas Taylor (Kara); Stephen Taylor (Lindsey); Madeline Taylor (David); Candi Tracey; Gianna Taylor; Zachary Grimm; Clare Grimm, and Sean Taylor; ten great-grandchildren and several nieces and nephews. Barbara leaves her lifelong friend Shirley Indelicato, also of Alexandria. When her children became school age, she was happy to find a part-time job as a switchboard operator for Rosenthal Chevrolet for a few years, but wanted to do more. So, in the 1980s, Barbara became a workload coordinator for United Airlines and received many recognitions for her work and leadership over her twenty year career. She balanced both family responsibilities and work by taking the “late” shift at a reservation call center near Dulles Airport. She loved her work and her work family. Working for the airlines was a perfect fit as it fed her desire to travel with friends and family to many cities and countries around the world. Barbara loved to garden and bestowed that on her children and grandchildren, often having them help prune the beautiful plants she had in her yard, especially her azaleas and camelias. She loved to cook and made the most delicious baklava; and all who knew her will certainly miss her signature pumpkin bread which was an annual fall treat she loved to share. Barbara’s door was always open, and her kitchen table always had a seat available for friends. We will all miss her beautiful smile, quick wit and warm heart. Family will receive friends from 3:00 until 6:00 p.m. on September 16, 2021, with a prayer and remembrance at 5:30 p.m. at Jefferson Funeral Chapel in Alexandria, Virginia. Interment at Arlington National Cemetery on a date to be determined. Barbara and her family are especially thankful for the wonderful and professional caregivers who supported her at the Goodwin House. In lieu of flowers, the family welcomes memorial contributions be made in her honor to the Goodwin House Foundation, 4800 Fillmore Avenue, Alexandria, VA 22311 or https://www.goodwinhouse.org/giving/programs/ or to the Essex County Community Fund/Lawrence High School Alumni Association https://secure.etransfer.com/eft/flexblockcode/donation1.cfm?d2org=ECCF&d2tool=LawrenceHSAA.

Barbara Marie Taylor, 89, of Alexandria, Virginia, passed away peacefully on Saturday, August 14, 2021 at the Goodwin House after a long illness. She was born in Lawrence, Massachusetts on February 14, 1932 and was the daughter of hardworking... View Obituary & Service Information

The family of Barbara Marie Taylor created this Life Tributes page to make it easy to share your memories.

Send flowers to the Taylor family.